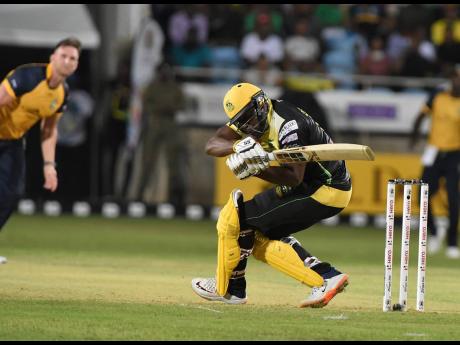 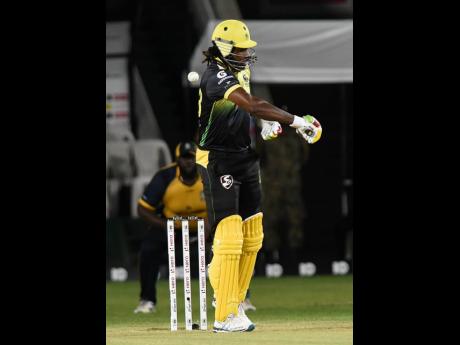 Christopher Gayle reacts after he was out caught behind for a first ball duck last night at Sabina Park. St Lucia Zouks beat the Jamaica Tallawahs by five wickets.
1
2

T he Jamaica Tallalwahs suffered their third straight defeat in the 2019 edition of the Caribbean Premier Leaguem (CPL) following a five-wicket loss to the St Lucia Zouks at Sabina Park last night.

The Zouks on the back of some swashbuckling hitting from Rahkeem Cornwall and Andre Fletcher chased down the 170 needed to win in just 16.4 overs.

The loss leaves the Tallawahs pointless at the bottom of the standings after three losses with the Trinbago Knightriders up next.

Earlier, the Tallawahs, who were asked to take first strike, were off to the worst possible start as the 'Universe Boss' , Chris Gayle, went to the first ball he faced for a duck to pacer Obed McCoy.

When McCoy sent back Chadwick Walton for 8, the Tallawahs were in a spot of bother at 27 for 2 after 3.2 overs, however, Rovman Powell and wicketkeeper Glen Phillips turned the tide with an 87-run third-wicket partnership.

Powell began in a confident mood hitting spinner Fawad Ahmed for a six and a four in the fifth over, while at the other end, Phillips tore into Kesrick Williams with the same treatment in the sixth over.

After hitting Ahmed for a six in the 11th over, Powell went for another big shot, however, he was brilliantly caught by Collin de Grandhomme on the long-off boundary for 44 at 114 for 3.

Philips would continue to play positively and he brought up his half-century off 26 balls, however, when the New Zealander got to 58 he held out off Ahmed.

Things would then get worse for the Tallawahs as home town hero Andre Russell was felled by a sharp bouncer from pacer Hardus Viljoen. The right-hander had to retire hurt on nought and word came back that scans were negative following a CT scan.

That incident saw the Tallawahs innings sputter to 170 for 5 after 20 overs, as the home side managed just 62 runs in the final 10 overs.

The Zouks went about the run chase frantically from the opening over when Andre Fletcher hit the second ball of the innings into the stands for six.

Cornwall would then get into the act, as he tore into Taylor's second over, hitting the pacer for two massive sixes.

That would be the mode for the rest of the innings, as the pair slaughtered the Tallawahs' bowling, posting 50 runs after just 26 balls and a hundred runs after just eight overs.

The Tallawahs did not do themselves any favours in the field either, as they put down three chances as the hosts lost the plot following the onslaught.

Cornwall would blast himself to a third CPL fifty, however, when he got to 75, he was undone by Shamar Springer. His impressive knock off 30 balls included four fours and eight sixes.

Despite pacer O'shane Thomas picking up three quick wickets in the latter part of the innings, the writing was already on the wall as the Zouks cruised home at 171 for 5 in 16.4 overs to hand the St Lucia side their first points of the CPL campaign.

Andre Fletcher finished with an unbeaten 47 from 36 balls and the victory was a sweet won for Man of the Match Rahkeem Cornwall.

"it's a good feeling to get over the line and get the win, I backed myself from ball one and we are going to celebrate this win and get ready for St Kitts," Cornwall said.

Losing captain Chris Gayle said his team was disappointed with the ball once again.

"We were poor with our bowling in the first six overs, few of our plans worked tonight, we need to go back to the drawing board and come back strong against Knight Riders tomorrow,"said Gayle.