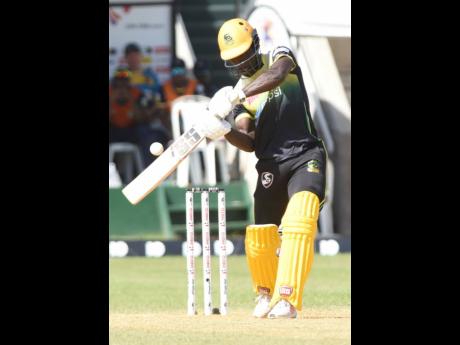 Chadwick Walton plays a shot in his way to scoring 51 not out against the Barbados Trident yesterday.

Stand-in captain Chadwick Walton smiled through the entire interview with journalists at Sabina Park as his Jamaica Tallawahs team chalked up their first win of the 2019 Caribbean Premier League.

Walton was the star with the bat, as the Tallawahs chased down the 140 runs needed to defeat the Barbados Tridents by four wickets.

The right-hander got good support from opener Glen Phillips, who made 28 from 15 balls and Javelle Glen, who got 27 from 12 deliveries.

Opener Chris Gayle hit one four and two sixes in his knock of 22 as the Tallawahs chalked up their first two points after five attempts in this year’s CPL.

Earlier, the Tallawahs, who made three changes to their line-up, put in a much better bowling performance to restrict the visiting Tridents.

Left-arm chinaman bowler Zahir Khan bagged 3 for 20 from four overs, while there two wickets each for George Worker and Ramaal Lewis.

The win was a welcomed relief for Walton, who praised the team for their improved performance.

“Fortunately for me I took the team over the line, I knew once we batted the 20 overs, we would get the runs. It wasn’t any pressure and we didn’t have to take any unnecessary risk, any win is a crucial win and we are happy”, said Walton.

The Jamaica Tallawahs will not be celebrating too much as they face a tough opponent in the Guyana Amazon Warriors next at Sabina Park on Wednesday.

The Warriors are unbeaten in four games, and the task will be even greater as the Tallawahs will be without all-rounder Rovman Powell, who has been ruled out of the rest of the CPL with an injury.

They, however, will be encouraged by the news that all-rounder Andre Russell could make a return having been sidelined following a head injury.