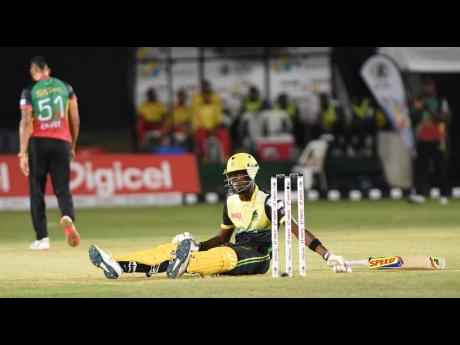 Shamar Springer from the Jamaica Tallawahs was left flat on the ground after a wild swing and miss off the bowling of Rayad Emrit in a Caribbean Premier League at Sabina Park yesterday. 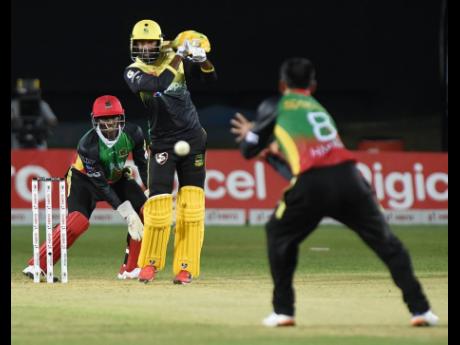 Imran Khan (centre) from the Jamaica Tallawahs is bowled and caught by Mohammed Hafeez (right) from St.Kitts and Nevis Patriots, while the wicketkeeper Devon Thomas (left) looks on.
1
2

The Jamaica Tallawahs once again disappointed their home fans after suffering their fourth loss in five home games in the Caribbean Premier League, as they succumbed to their second consecutive loss to the St. Kitts and Nevis Patriots by 20 runs at Sabina Park last night.

With three matches remaining in the preliminary stages, the Jamaican franchise now face an uphill task to advance to the playoffs, a feat they have managed to achieve in the first six editions of the competition.

Batting first, the Patriots who were asked to take the first strike, posted a respectable 176 for six off their allotted 20 overs, with Jamaican Fabian Allen leading the way with an attacking 62 from 27 balls which including seven fours and three massive sixes.

Captain Mohammed Hafeez chipped in with a brisk 37 from 25 balls as the Patriots capitalized on some wayward bowling from the Tallawahs in the latter part of the innings.

Earlier, the Tallawahs showed good signs with the ball restricting the visitors to 82 for six after 12.1 overs, but Allen and Keron Cottoy shared in an unbeaten 94 run seventh wicket stand to post a formidable total for the visiting team.

Cottoy finished on 27 from 23 deliveries as there was a wicket each for Andre Russell, Dwayne Smith, Jade Dernbach, Shamar Springer and spinner Zahir Khan.

The Tallawahs once again were looking to get off to a decent start with Chris Gayle and Glen Phillips at the top of the order, however, the 'Universe Boss' Gayle failed to deliver in front of his home fans once again.

But Glen Phillips continued his good showing with the bat as he made a valiant 87 from 49 balls to give the host a chance of overhauling the total.

When Phillips fell to Cottoy in the 16th over with the score on 123 for 6, it was all she wrote for the home team with the bulk of the batting already in the pavilion.

Shamar Springer played a few shots to get to 30, but his dismissal sealed the loss for the host, who were dismissed for 156 in 19.5 overs.

Losing captain Chadwick Walton felt the visiting team had 20 to 30 runs too much on the night.

"We are disappointed for the loss despite a better bowling performance," said Walton.

Winning captain Carlos Brathwaite said his team is beginning to gain some much-needed momentum at the right time.

"We spoke about putting in a team performance tonight and guys like Allen came out and did a good job and we will cherish this moment tonight,"said Brathwaite.