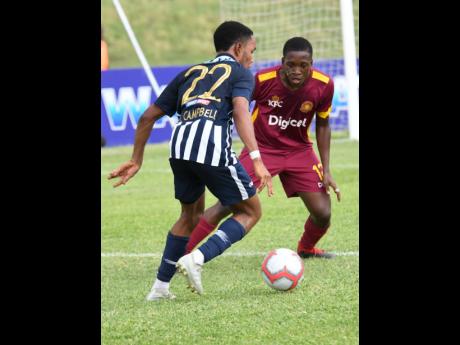 Nickari Campbell (left) of Jamaica College tries to get by Christopher Matthews of Wolmer’s Boys School in a ISSA/Digicel Manning Cup game at Stadium East on Monday, September 16, 2019.

Many time champions Jamaica College (JC) are looking to secure the top spot in Group E as the first round of the ISSA/Digicel Manning Cup concludes today.

The Dark Blues travel to Jose Marti Technical High school in their rescheduled fixture at 1 p.m. already leading 2-0. The match, which was originally played on October 5, was called off due to inclement weather.

JC, who rescued a point in their 2-2 draw with Wolmer's Boys School on Wednesday, have command of the group with 29 points, two more than the Maroon and Gold who are in second place on 27 points and have booked qualification themselves.

While the Devion Ferguson-coached team is looking to finish the job they started in the first round, he is confident that the standard of his team will not slip.

"One of the objectives is to finish on top. So once we maintain that result we have against Jose Marti, we would finish in a favourable position in terms of the seeding."

Ferguson is satisfied that his team is in a good position as they prepare for the knockout rounds, which are set to begin on October 22 but he is warning his charges against complacency.

"We are heading into the second round where we want to [be] but I don't think we can be complacent at any given time. This is the business end and how we want to approach this leg of the campaign is how we approached the [group stage] with a business like approach, one game at a time, and try to get a positive result," he said.

Meanwhile, St Jago will travel to Haile Selassie in the final game of Group A at Spanish Town Road. St Jago, who are in third place with 17 points, have to win to qualify for the last 16. Holy Trinity and Cumberland High are tied on 19 points but Holy Trinity have a superior +20 goal difference lead the group and have secured a spot in the knock-out round. Cumberland can qualify for the second round if St Jago fail to beat Haile Selassie.