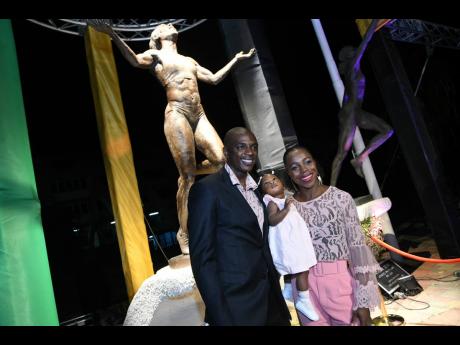 Veronica Campbell-Brown, her husband Omar Brown and daughter Avianna pose in front of the newly unveiled statue at Statue Park at the National Stadium on Sunday.

N ine months after welcoming her daughter Avianna into the world, Veronica Campbell Brown has her eyes set on making a return to track and field.

Speaking at the unveiling ceremony of her status at Independence park on Sunday, the multiple Olympic and World Championships medallist said that she has resumed training with the desire to make it to her sixth Olympic games next year in Toyko

"I said this a couple months ago that I will see how [next] season goes. I'm back in training right now. And if all goes well, I will be on the team to Tokyo," she said after the ceremony.

The recent World Championships in Doha, Qatar, saw several women returned to the summit of their events after taking time off to have babies.

Shelly-Ann Fraser-Pryce blitzed to 10.71 seconds to win her fourth 100m World title, having returned to action last season after the birth of her son, Zyon. American Allyson Felix, who gave birth to her daughter Camryn 10 months ago, became the winningest gold medallist at the World Championships when she captured her 12th and 13th gold medals in the mixed and women's 4x400m.

Her compatriot Nia Ali also returned to win the 100m hurdles title. Campbell-Brown says that their success proves that there are no limits to what women can accomplish.

"It was so great to watch Shelly and Allyson and Nia and all the other mothers in Doha and achieving great things doing it after [giving birth]," she said. "That just shows how strong-willed women are and how God has created us to do create things. As long as we focus and put our minds to whatever we want to achieve, we can accomplish it."

She recognises better than anyone what is required reach the form which saw her win eight Olympic medals and 11 World championship medals and hopes that preparations will allow her to have her own glorious return.

"The biggest hurdle is making the Jamaican team and so if God has it in store for me to join the Jamaica team, then I will be grateful," she said.

She does have extra motivation for next season other than being on the plane to Tokyo as she desires to compete in front of Avianna.

"For me in whatever I do I always put my best foot forward," she said. "And I'm not chasing anything. But it would be a great accomplishment if i could be able to compete in front of Avianna because although she may not be able to know whats going on but she will have the memories to look back on and to motivate her."