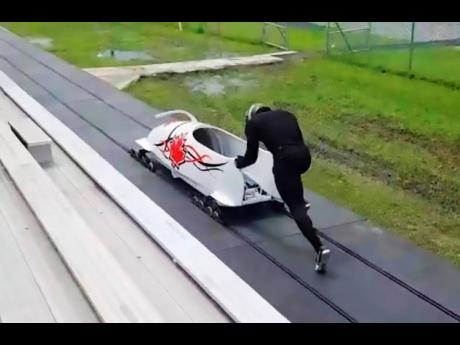 Bobsleigh in Jamaica took another step forward as a new push training facility was installed at the G.C. Foster College. The new portable track which was purchased in 2015 from the Canadian Boblsed and Skeleton Association with the help of the Sports Development Foundation (SDF) and other entities, arrived in Jamaica earlier this month and will get its first test in a time trial on Thursday. The total cost including purchase and getting it into the country is estimated to be around US$70,000 (J$9,552,200).

Chairman of the Jamaica Bobsled and Skeleton Federation Chris Stokes believes that the acquisition of the track puts the federation in a great position to enhance the development of the athletes in training and also to expand the recruiting process for future prospects.

"Now we can test people's ability to push a sled which is very important," he told STAR Sports. "[Previously] The first time that we would be able to find out if you can push a sled is when we travel. But we will be able to do that testing in Jamaica and in fact integrate it into our athlete selection process. Because it is portable we can take it to Westmoreland and St Elizabeth, we can take it Portland and thereby deepen the national recruiting effort across the parishes."

Stokes pointed out that the new track presents options that they did not have before, including being able to launch bids for regional and international competitions

"It allows us to have a world-class push facility for our local athletes to during the off season May-October, before they go on the ice and we can now do that in a high-quality environment. Then, it will allow us to host a national push championship, regional push championship and eventually to bid for the international Bobsled and Skeleton push championships which we intend to do," he said.

He is thankful for the support of Puma, Minister of Sport Olivia Grange and the Sports Development Foundation(SDF) in particular for the support of bringing the equipment into the country. "This would not have been possible without the encouragement of Minister Grange,the flexibility in the SDF to really help us to go that extra mile in getting it landed delivered and set up and the athletes are able to the train on the track," he said.

The time trial on Thursday will be for athletes who are already in training for races on the professional circuit in North America and Stokes said that they have gotten rave reviews already on the facility. "The athletes are absolutely delighted. They were out there at the G.C. Foster training and it is a positive thing. So now they get to train with it as opposed to November, December. So it's a really positive thing," he said.