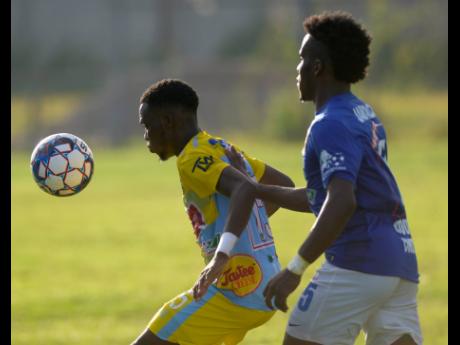 Two players from Waterhouse FC will have an opportunity to take another step in their football careers as they have been invited to take part in the MLS Caribbean Combine next month.

Midfielder, Andre Fletcher and goalkeeper Akeem Chambers will showcase their talent to the coaches and agents from teams in Major League Soccer on December 2-4 here in Kingston.

The two players were impressive in the Concacaf League where Waterhouse made a deep run before they were eliminated at the quarter-final stage of the competition.

"It is a great feeling because it was always my objective to play overseas and to get this opportunity I just have to make the best of it," the Waterhouse custodian said.

Chambers won two man of the match awards in the Concacaf League and the former St Jago player believes those performances played a role in him being invited to the combine.

"I think those two performances in the Concacaf league really helped but I have been working really hard and pushing for the stars. I have been at Waterhouse since I was nine years old and I was called up to the senior team when I was 15. I have to thank all of the staff at this club who have played a part in my development," Chambers said.

Fletcher was also impressive in the Concacaf League as he netted three goals.

"I am really happy for the call and when I go out there I just have to do my best. I think what I will showcase is my work rate, my ability to pass the ball and to run into position," said Fletcher who played for Dinthill Technical High School.

The MLS Caribbean Combine is an annual showcase of Caribbean football talent between the ages of 18-21 organised jointly by Major League Soccer and the Caribbean Football Union.

It provides opportunities for Caribbean players to be observed by MLS scouts with the hopes of being invited to the MLS Combine, where they could be drafted to play in North America's top- flight league.