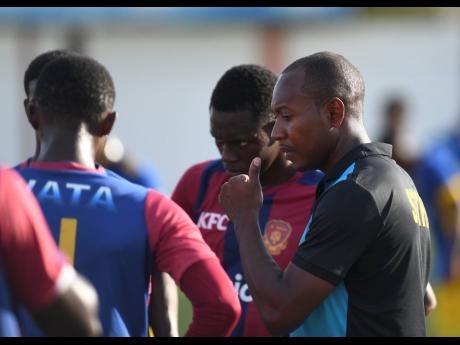 Coach of St Andrew Technical High School (STATHS) School Philip Williams (right) engages his players in a discussion during a match against Papine High School at the Edward Seaga Sports Complex on September 20, 2019.

STATHS advanced to the quarter-finals of the all-island knockout competition with a come-from-behind 2-1 win over The Manning's School last Saturday at the Montego Bay Sports Complex in Catherine Hall. They are drawn to face defending rural area champions Clarendon College at Stadium East tomorrow at 4 p.m.

Williams, who admitted it will be a difficult task given the level of competition at this stage of the competition, promises they are going to give it their best.

"It's been a while since we have won a title so definitely we are looking at the Champions Cup as one that is up for grabs. It is rough on the squad because we are playing against some quality teams in a limited number of days. We are going to give it our best shot because this is one of the titles that we have our eyes on," Williams said.

After handsomely dismissing St George's College 3-1 on Wednesday to secure a spot in the semi-finals of the ISSA/Digicel Manning Cup, STATHS, who finished as Mannings Cup runners-up in 2017 and semi-finalist last year, are determined to go one better this season by taking home a trophy.

"It's not really tough to get the current squad to live up to the 2017 or 2018 era. We have a lot of players who where fringe players in those years and would have experienced the journey. They are used to being here and with that experience, I hope they can do one better," Williams said.

Jeadine White and others are big losses but what it does is to get the team to play much better as a team, instead of depending on the safe hands of Jeadine. So, yes, we have lost some good players over the years but right now we have a very rounded and deep team. The boys know they have to work together to better what was done before."