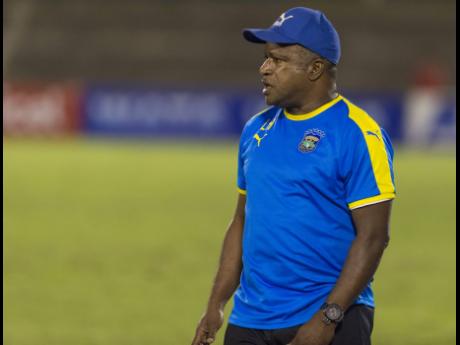 Clarendon College (CC) head coach Lenworth 'Lenny' Hyde has praised scorers Sheldon Smart and Jalan Larman, whose individual brilliance led them back into the final of the ISSA/WATA daCosta Cup for a third straight season.

"He (Smart) played well again for us," Hyde said. "We didn't have a real striker this season, so we were searching around, we put him up there and he has been delivering for us. It's a good find for the team and we will have him for next season, so it is good for us.

"For the past four or five games, he (Larman) has been doing it for us. This is his last season, so we told him that 'Big man you have to step up and do it for the team'. It's good to see him now doing that."

The defending champions survived a nervous first half to get the better of first-time semi-finalists McGrath High by a 3-0 margin, in the first match of a double-header at the Montego Bay Sports Complex.

Despite Larman's lively runs down the left flank and his enterprising defence-splitting play, which saw him breach the minnows' backline on several occasions, McGrath managed to hold off their highly -fancied Clarendon opponents in the first half, taking them into the break locked at 0-0.

CC, however, came out in the second half with more purpose and it took only two minutes for them to break the deadlock, when Smart slotted home a spilt save by the McGrath goalkeeper from a free kick.

Smart returned to double his team's advantage, netting his second in the 69th minute with a skilful lob shot over the advancing goalkeeper.

Larman eventually reaped the reward for his individual brilliance in the 80th minute, dribbling past three defenders before cutting inside to his right foot and curling a shot past the outstretched goalkeeper.

After being held goalless in the first half, Hyde said his team's response in the second half shows another side to their game, giving credit to his boys for the patience they showed to eventually break down the McGrath resistance.

"We didn't start well in the first half, I think they (McGrath) defended well. However, we were patient, showed that we can wait and play out the 90 minutes," Hyde said.

CC will now meet Dinthill Technical in the championship game. Dinthill secured their berth with a 2-1 win over last year's runners up, Cornwall College, with goals from Rojia Layne in the third and 73rd minutes. Brandon Curate scored Cornwall's consolation goal.