Portmore start journey back to the top 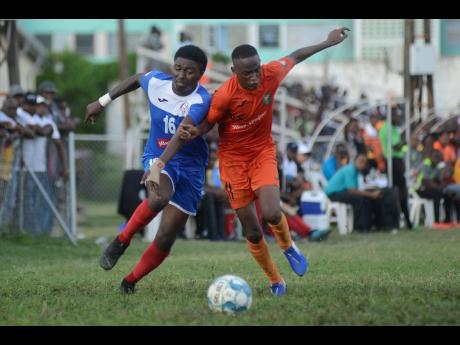 Portmore United head coach Ricardo Gardner said that his team is up to the challenge of moving back into playoffs contention after clipping 10 men Tivoli Gardens 1-0 in their Red Stripe Premier League game at the Edward Seaga Sports Complex yesterday.

The defending champions start to the second round of the season was a complete reversal of how they began the first, losing the opening the to newly promoted Molynes United and going on a three-game losing streak before registering their first win against Harbour View on September 22.

The two-time defending champions were eighth in the standing coming into the game and Rondee Smith's free kick in the 72nd minute seems like the first step in the long journey back to the top.

Gardner said that there is a lot of work to do still for his team but is confident that his team is up for task of defending their title. "It is a challenge but it is a challenge that we are up for. That is the nature of the football club. We are ambitious and we are working towards achieving those goals," he told STAR Sports. "It's still possible but we have a lot of work to do."

The victory was also only the third time this season that Portmore were able to keep a clean sheet and Gardner wants more of those as the season goes on. We have to continue to keep clean sheets. We don't keep a lot of clean sheets since the start of the season," he told Star Sports.

Portmore were given a huge advantage four minutes from halftime when Tivoli's Dasha Satchwell was sent off for a dangerous challenge on Shai Smith. However it did not work in their favour as it was the home side that seemed the mostly likely to score. When substitute Jermaine Johnson was fouled in the box and awarded a penalty, Rodico Wellington was poised to give the home side the lead. But his spot kick lacked power and goalkeeper Kemar Foster made the save to his left. Gardner said that was the catalyst that helped his team gain the three points.

"It was a good save from Foster. He came up big for us and kept us in the game. And then we went the other end and converted our chance," he said.

"I'm really happy for the players that they dug deep and saw out the game and it was a good victory in the end."

The win temporarily moves them to seventh place with 15 points ahead of yesterday's late game between Cavalier SC and Arnett Gardens. Gardner said that he is seeing the hard work come together and the challenge now is to make sure that he team becomes more consistent.

"We are working hard in the week and we are getting there. We can see as we play each game that the team is taking shape. We just have to continue to grind ourselves out during the week and to bring those performances into games every weekend," he said.

Portmore host Mount Pleasant next Sunday at the Prison Oval at 3pm.