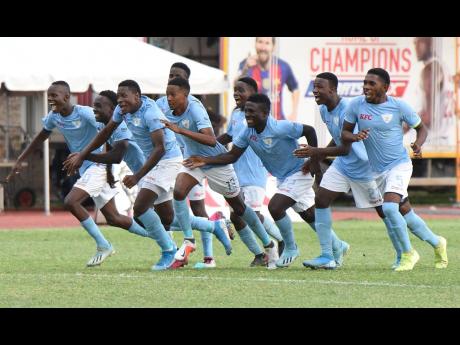 St Catherine High School footballers celebrate after defeating St George’s College on penalties in the semi-final of the Walker Cup at the Stadium East field yesterday. 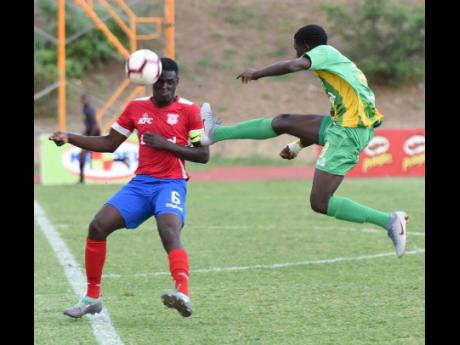 In the second game of the double header, the crowd was treated to a seven-goal thriller as Excelsior outscored Campedown 4-3, thanks to an 85th-minute winner from substitute Daniel Clarke.

The game saw four lead changes with the first three goals in the first half scored in the space of five minutes. Excelsior's opener came in the 15th minute through RoJaughn Joseph. Camperdown captain Giovanni Liang equalised from the penalty spot in the 17th minute, but just three minutes later Junior Parker restored the lead for Excelsior. But, Camperdown restored parity again in the 37th minute through Shawn Daley.

The school from east Kingston managed to go ahead for the first time in the game after Tivelle Edwards tapped in a cross from kenley Deaconin in the 63rd minute, but Excelsior's Jhevan Smith levelled the game once more seven minutes later drilling his free kick low into the corner past Camperdown goalkeeper DeShawn White.

The game was heading for a penalty shoot-out when Excelsior's Clarke got the winner five minutes from the end as his effort soared over the head of White and into the net.

Excelsior Technical Director Leebert Halliman praised his team's ability to adapt to different situations and the attitude displayed in the second half on route to playing for their eighth Walker Cup title.

"Dropping three of our starters because of various reasons and to come here and do so well, it shows how well these boys adapt to the situation," he said.

[At half-time I told them] to keep your composure, play what we know. We can't change at this time of the year. Play like how we have been playing from the start of the competition till now and we will be successful," he said.

Camperdown assistant coach Donovan Lofters lamented the defensive errors that lead to the goals being conceded.

"I'm very disappointed especially with my leaders at the back," he said. "We gave up some soft goals. We haven't given up so many goals in 10 years now we chose the time where we need to be the tightest to be sloppy around the back giving up four goals.

In the early game, St Catherine High School came a step closer to their first major schoolboy title defeating St George's College 5-4 on penalties in a massive upset after it finished 1-1 in regulation. Chantomoi Taylor gave George's the lead in the 40th minute, but Jevaughn Cole got the equaliser for St Catherine in the 63rd minute with a brilliant one-time effort.

Patrick said that he is pleased with the effort of the boys putting their all into the Walker Cup competition after being eliminated in the Manning Cup second round at the hands of Wolmer's Boys.

"I'm very pleased with the guys. This is something that we have spoke about at length," he said after the game. "Once we lost the game against Wolmers [in the Manning Cup second round], [I told them] let's see if we can win some silverware this season."

On the other hand, it was a cruel way to end the schoolboy football season for St George's College losing their second consecutive penalty shoot-out of the season. The Neville Bell-coached team were eliminated by Cornwall College in the ISSA Champions Cup on penalties on November 9 and said that his team did well enough to win the game in regulation.

"I thought we played well. I don't think anyone likes to see a penalty shoot-out," Bell said. "We have gone 19 games this year and we only lost on in the run of play [against St Andrew Technical]. I thought we did enough to win it but unfortunately we didn't."

"I congratulate these youngsters because they put everything out which is all I ask."