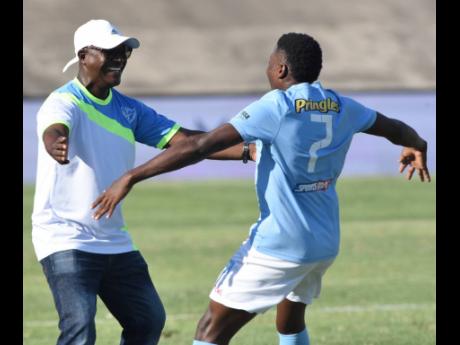 St Catherine High School ISSA Walker Cup-winning coach Anthony Patrick has shrugged off rumours that he will be leaving the school to take up another coaching assignment.

Patrick, who brought silverware to St Catherine for the first time in their history following their 3-2 win over Excelsior High in the final, had been linked with a move away after being approached by several schools both from the urban and rural areas.

Despite being out of contract following the end of the schoolboy football season, Patrick told STAR Sports that he has had a great relationship with the St Catherine hierarchy and that he is expecting to re-negotiate a new contract soon.

“Yes, I am out of contract now, but I expect to meet with the stakeholders soon to look into a new contract,” he said. “I have been approached by some schools but everybody will have to wait as I sort out the situation with St Catherine first.”

The man who also led Bridgeport to Manning Cup titles back in 2001 and 2006 says he wants to remain at St Catherine and build on the football programme which has begun to show real potential in recent times.

“We will have a good team next season as only five of the players that started the Walker Cup final will be leaving,” he said. “We should retain six of our starters plus seven other reserve players, so we should be in good stead next year.”

Under Patrick, St Catherine were one of the most prolific teams in the Manning Cup, scoring 48 goals in the first round behind Wolmer’s Boys, 57, and Jamaica College, 54.