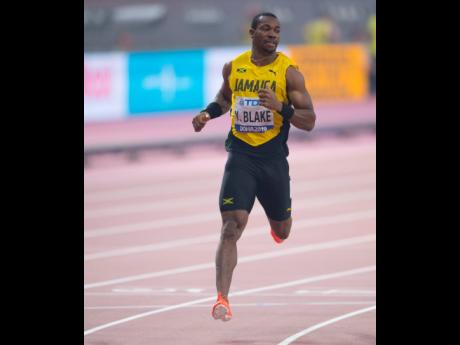 In an interview with the Times of India on December 3, the 29-year -old shared the difficulties in facing Bolt and that that if it wasn't for his dominance on the track, the title of world fastest man would be his.

"If you take Bolt away from the picture, I will be the fastest man in the world. I was born at the wrong time," he said.

Blake has compiled an impressive resume of his own during his career highlighted by his win in the men's 100m at the 2011 World Athletics Championship in Deagu, South Korea, becoming the youngest world champion in the event. He started the following season strongly, quickly establishing himself as the greatest threat to Bolt's Olympic titles defence when he beat the six footer in the 100 and 200 metres at the Jamaica National Championships. But Bolt found back his form at the London Games and became the first man to retain his Olympic sprint double title.

Once herald as the heir apparent to the title of world's fastest, Blake's career has been hampered by injuries. Despite this, he says that he is proud of the accomplishments up to this point.

"Nevertheless I am still happy with what I have achieved. Yes it was hard because it was his time and it was hard competing against Bolt," he said.

"I do regret not competing against him as much as I had wanted but it's not my fault, it's my ex-coach's fault. But that's behind us and I am looking to the future. When that guy Bolt is dominating you, it is not easy to emerge from his shadow. When I won the world championship in Daegu (Korea) in 2011, clocked 19.26 in Brussels and timed 9.69 in Lausanne in 2012, I created my identity,"

Blake who is now under the guidance of Gregory Little indicated that the 2020 Olympics in Tokyo will be his last and he believes he can sign off his Olympic career with that elusive individual gold medal.

"Definitely, that's the aim. I am dangerous when I am training and you can probably see something greater than the 'beast' in Tokyo. There is a lot of pressure as an Olympic gold is much bigger than a World Championship gold," he said. "Even if I don't win, it will be my last Olympics."