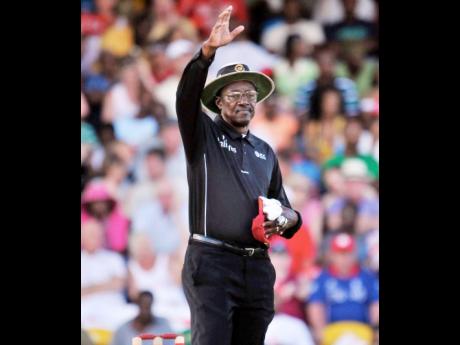 Cornwall College (CC) principal Michael Ellis is excited about the return of former ICC umpire Steve Bucknor as the under-14 cricket coach as they look to restart their cricket programme.

Bucknor was also the coach of CC's (his alma mater) DaCosta Cup team, winning six titles between 1981 and 1991. He was goalkeeper and captain of the team that won the DaCosta Cup and Olivier Shield in 1963.

"We welcome it with both arms," Ellis said. "A man with Steve Bucknor's stature, experience, and skills you would want to employ every day in the school. He brings a lot in terms of the history and rules of the sport, as well as help [the players] to develop good sportsmanship within the spirit of the game.

"While he is here, he is going to be doing a clinic, teaching the Under-14 cricketers the basic skills of the sport. We are seeking to rebuild our cricket programme, starting from the grassroots. As a result, we are drawing on the expertise of our old boys. People like Steve Bucknor, Jeff McLeod (who also played cricket at CC), among others, to assist us with not just imparting the skills, but certainly build a culture of cricket.

"It will help the boys to understand that Cornwall College is not just about football. We used to do well in cricket back in the day, and it is our hope that we can rebuild a very strong and formidable cricket team which will provide an outlet for the boys, who are so inclined."

Bucknor, who was a physical education teacher and cricket coach at St Elizabeth Technical High School (STETHS) in 1968, says his expertise will propel the programme forward, despite the boys just learning the game.

"Where we are now, I'm trying to get the Under-14 boys to learn the game properly," he said. "Bowling is the first aspect, then we go to batting, and then fielding. I'm teaching them as much as I can so that eventually, we will have persons that can play.

"It is a matter of getting something off the ground, starting from scratch. Getting them to do things is what I am here for, and I think I can teach anybody the sport, because I would have learnt a lot on the international scene."