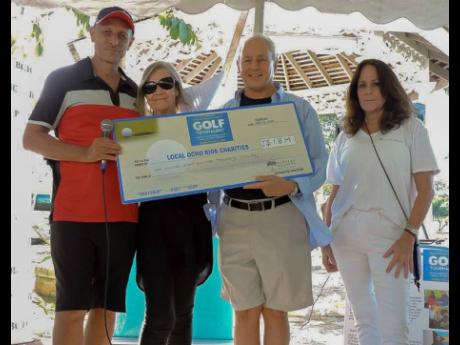 Following another successful staging of the Couples Resorts Ocho Rios Charity Golf Tournament, Grange Hill Primary School in Westmorland is expected to receive part proceeds from the 19th staging of the golf event.

The golf tournament, which featured 92 local and foreign participants, has part of the resorts anniversary celebrations for almost two decades and has raised more than $24 million for local charities, including the Bahamas Hurricane relief, Animal House Dog Shelter and the Three Hills Primary School in St. Mary.

The annual Couples Negril tournament, held in October last year, raised some US$30,000 for the relief efforts in The Bahamas as well as funded a computer lab for Three Hills Primary.

With $1.8 million raised from the Ocho Rios tournament, CEO Glen Lawrence said it is only fitting that a school in the west benefits this time around.

"Because Ocho Rios benefited from the Negril tournament last year, we were not hung up on the fact that the money has to stay necessarily in the parish and so a need came up for the school in Westmorland and so we felt that we could give a helping hand out west," said Lawrence.

ZandreRoye and Oshane Haye came out on top with a gross score of 62 in the two-man scramble format. Romaine Evans and Gifford Wilmot were second with 63.

Raymond Rhudd and Nick Tassone were the first-place winners with a net score of 60 with Romario Anglin and Ian Royal second with 61.