Bucknor: No mistake haunts me 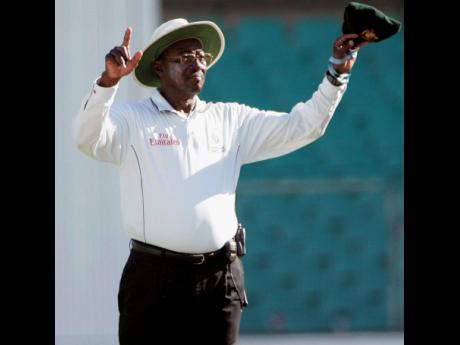 Former international cricket umpire, Jamaica's Steve Bucknor, has hit back at his detractors following the recent circulation of a video on social media which highlighted a number of bad decisions he made in his twilight days. Bucknor was rated the world's best umpire during the 1990s and early 2000s. He is the only umpire to stand in five ICC Cricket World Cup finals (1992 to 2007) and the first to umpire in 100 Tests. The 73-year-old held the record for standing in most Test matches until December 2019, when Aleem Dar of Pakistan stood in his 129th Test match. He also officiated in 181 one-day internationals. In an interview with STAR Sports recently, Bucknor was asked how he viewed the criticism. "I don't worry about that. If you ask them how many mistakes I made, they probably tell you one or two but they can't find a bundle of mistakes per game. I can remember making two mistakes in one game which was my worst game," Bucknor said.

"It's a lot worse with younger people now, although I won't compare myself with them. If I make one that is enough. There was a big commotion (during a 2008 Test match between Australia and India) when other umpires were making a lot more but it's not my business to compare myself with them. We would have seen officials of today, a lot younger, accumulating some 17 mistakes in one game between the two umpires," he added.

Bucknor said he now has a clear conscience. "No mistake haunts me. I can still see them and I can tell you why these mistakes were made. But on spot, you would see it differently. I'm not worried about persons talking about my mistakes ... Two mistakes in a game is too many by my standards," he said.

The majority of his errors came in his last couple of years as an umpire but he doesn't believe he stayed on too long.

"I don't think so. I stayed on until the age of 63 and you have persons who at that age were fading badly so I did not wish to go beyond 63. I would have done my last World Cup at 61 so two years after the World Cup (which was a good one for me), I think would have been good enough.

"I still see very well today, even without glasses. I only use glasses to read. Even now I still umpire in New York a lot, every weekend from April to October," he said.