Powell ready to take Jamaica back to the top of sprinting 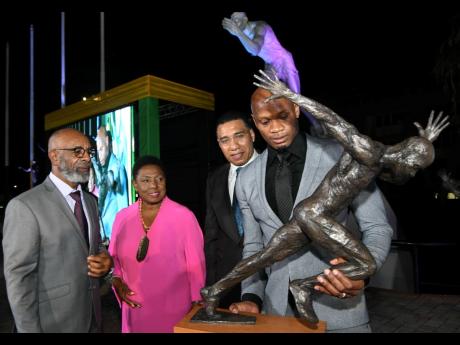 Asafa Powell (right) inspects the bust of a sculpture of himself in Statue Park at Independence Park yesterday as (from left) sculptor Basil Watson, Minister of Sport, Olivia Grange, and Prime Minister Andrew Holness look on. 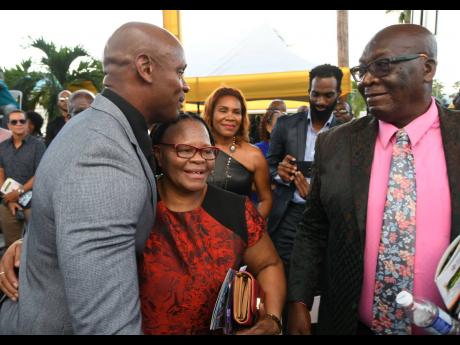 Asafa Powell shares a hug with his mother, Cislyn as his father William looks on before the unveiling of a statue of the former world record holder yesterday at Independence Park.
1
2

The 37-year-old was celebrated for his contributions to the legacy of Jamaican athletics at the unveiling of his statue at Independence Park last night.

Created by sculptor Basil Watson, the statue was the final part of the Jamaica 55 Legacy project commissioned by the Ministry of Sport to honour Jamaica's outstanding athletes.

Since the retirement of sprinting legend Usain Bolt, it has been a tough period for Jamaica male sprinting. While 2011 World champion Yohan Blake made it to the final of the 100m at the World Athletic Championships in Doha, he finished out of the medals in fifth position. Powell hopes that he can bring back the glory days where medals in the Men's 100m were expected.

"This year is a very big year, it's the Olympic Games. A lot of people are doubting Jamaica right now so, hopefully, I can be the one to really put back Jamaica in that spotlight," Powell told STAR Sports. I can be the saviour and go out there, do my best along with the other guys of the national team."

Powell statistical achievements are many which include him breaking the world record twice between 2005-2007. He holds the Guinness world record for the most times under 10 seconds with 97. With all the accolades he has amassed, he said that being recognised with his own statue was still stunning.

"I never expected this. So for me it's an overwhelming feeling and I'm very appreciative of it," he said.

His statue now occupies the same space where his fellow compatriots Bolt, Shelly-Ann Fraser-Pryce and Veronica Campbell-Brown were also honoured for their stellar achievements in athletics. Powell said that he was grateful to be among a group that has changed the face of athletics in the country.

Powell began his season at the Milo Western Relays on Saturday winning the 60m in 6.73 seconds. He is confident that he will be able to make the Jamaican team for one final run at the Olympics in Tokyo this summer. He says that feeling of representing Jamaica is still a privilege for him.

"For me it's always the greatest feeling to be out there on the track in the black green and gold and to know that thousands of people around the world are watching and Jamaicans are celebrating around the world," he said.