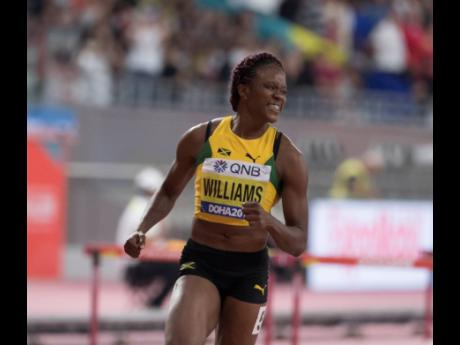 Though she has put together an illustrious six-year professional career, Danielle Williams has never participated in an Olympic Games and the former Queens School standout is focusing to change that this summer.

To meet her goal, the 27-year-old has cut her indoor season short although she is drawing close to adding the national 60m hurdles record to her accolade. Williams opted to end her indoor season after she experienced soreness in her hamstring moments after strolling to 7.99 seconds at the Tiger Paw Invitational meet last Friday.

"I will have to try to get the record next year because it is better to take precautions now than to be nursing an injury," she said.

The national record holder for the 100m hurdles lowered her personal best to 7.86s earlier this month in the 60m hurdles.

"The goal of this season is to make the Olympic team and so everything that we are doing is geared towards that," she said. "Last year, only eight people turned up at the national senior championships but this is an Olympic year and so I suspect more people will show up."

She continued: "We can only control what we control. So I have to just try to stay injury free and get one of the top three spots then take it from there."

Williams won a World title in the 100m hurdles in 2015 and finished third in the event last year in Doha, Qatar.