Cruz Azul come from behind to beat Portmore 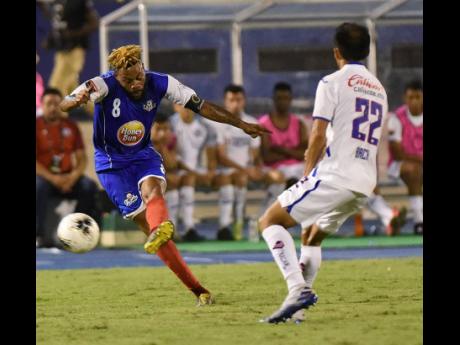 Mexican team Cruz Azul scored two late goals to come from behind to beat Portmore United 2-1 in the first leg of their Concacaf Champions League round-of- 16 tie at the National Stadium last night.

Rondee Smith put Portmore ahead in the 78th minute but strikes from Lucas Passedini and Jonathan Rodrigues in time added gave the Mexicans the advantage going into the second leg next week.

“It’s very difficult to take. We played a hell of a game. It was unfortunate we didn’t see out the game but there were things towards the end that we could have managed better,” he said.

Cruz Azul kept the host on the defensive for the first 12 minutes and Pablo Ceppelini’s effort in the eighth minute was tipped over by goalkeeper Kemar Foster.

Portmore were very direct in their approach and in the 13th minute goalkeeper Sebastian Jurado had to parry Chevaney Willis’ low shot around his post.

Ceppelini had a glorious chance in the 15th minute but his effort was blocked by Foster and when the rebound fell to him he crashed his second attempt against the bar.

Minutes later, Ricardo Morris tested Jurado with another low strike that was pushed for a corner.

However, the Mexicans looked the more likely to score and five minutes from time Foster denied Ceppelini another great chance.

After the break Cruz Azul continued to threaten and only some good defending kept them at bay.

But Portmore came close with a header from Willis in the 56th and Shai Smith shot over from 12 yards.

Jonathan Borja and Roberto Alvarado then wasted very good opportunities for the visitors.

But Portmore took the lead 12 minutes from time when Rondee Smith cross deceived Jurado and lodged inside the far post.

Portmore came close on a couple of occasions towards the end but they could not capitalise.

Then, in time added, Passedini equalised with a deflected shot, then just before the final whistle Rodrigues broke loose and fired past Foster for the winner.

Portmore will travel to Mexico for the second leg in the Azteca next Tuesday.