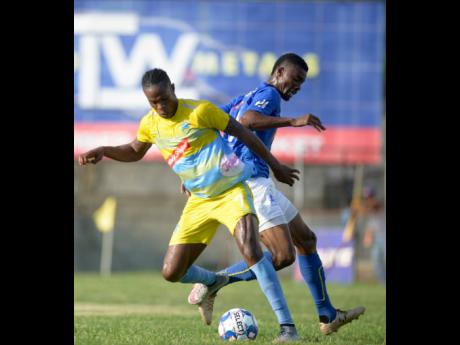 Waterhouse’s Stephen Williams shields the ball from Anjay Gayle of Vere United during their Red Stripe Premier League encounter at Drewsland on September 12, 2019.

Waterhouse maintained their position atop the Red Stripe Premier League (RSPL) standings with a 1-0 win over Humble Lion on Sunday but head Marcel Gayle said that it was far from the comfortable win that he wanted.

Keithy Simpson scored the only goal of the game from the penalty spot in the 77th minute as they registered back-to-back wins over the Clarendon-based outfit and take them to 50 points, keeping the three-point gap they have over Mount Pleasant who also won on the weekend.

Gayle said that the result was welcomed but described the game a frustrating one as the team was wasteful in front of goal.

"[It was] faulty finishing in front of goal. I think we created as much as we got but we didn't capitalise on them but we are still grateful," Gayle told Star Sports.

The club has been prolific in front of goal this season scoring 43 so far and although Gayle says that there is still room for improvement in that area, he elected not to do any business in the January transfer window believing in his squad's ability to improve their finishing themselves.

"We have the most goals in the league but we still think that we can improve that and I think the players here [can do that]. Looking elsewhere won't solve it," he said.

Waterhouse are coming off a positive showing in the Flow Caribbean Club Championship, advancing to the semi-finals of the tournament after placing second in their group. They will have until May to worry about their opportunity to qualify automatically for next season's Concacaf Champions League but Gayle is pleased with the way his team applied themselves and is looking forward to the chance of continuing to represent the country well.

"It's a showcase, it's a platform for the youngsters in the club and I mean the farther we go is the more that we are exposed. We just want to carry on the club name and make us be a staple in the football arena," he said.

Waterhouse will hope to keep their lead when they travel to the Edward Seaga Sports Complex to face Tivoli Gardens on Sunday.