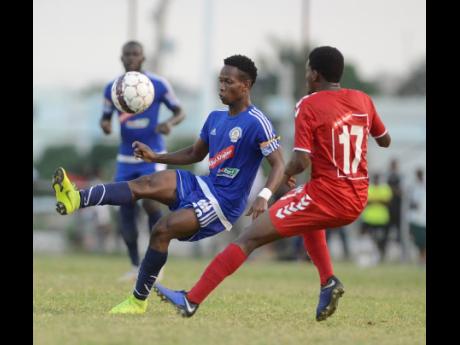 Mount Pleasant’s Kemar Beckford (left) brings the ball under control while being watched by UWI defender Stephen Barnett during a Red Stripe Premier League match last season. Beckford is the leading scorer in this year’s competition.

Coming off the heels of advancing to the semi-finals of the Caribbean Club Championship, league-leading Waterhouse had a 1-0 win over Humble Lion on Sunday. They have now extended their unbeaten streak to six games, with three wins coming out of their last four matches. They will not have to worry about the Caribbean club tournament semi-finals until May, ensuring that their entire focus is dedicated towards securing the regular season title and the one-million-dollar prize. With Mount Pleasant three points away from first place, Waterhouse cannot afford any mistakes with seven games renaming. They travel to the Edward Seaga Sports Complex to face play-off hopefuls Tivoli Gardens on Sunday.

Mount Pleasant forward Kemar Beckford is the new golden boot leader, netting his 13th goal of the season in the club's comfortable 3-0 win over UWI FC on Sunday. Having already surpassed his friend Corey Burke, who now plies his trade in Austria, Beckford hopes to continue his form in Mount Pleasant's bid to displace Waterhouse from first place in the standings. They will have to maintain their winning form to give themselves a chance, and will be tested when they travel to Arnett Gardens on Sunday.

Sergeni Frankson's last-minute equaliser in Molynes United's 2-2 draw against Arnett Gardens on Sunday may have put them one step closer towards Premier League survival. They remain in 10th place but now move to 27 points, nine ahead of UWI FC and Vere United who are both on 18 points. A win or two could be all that is required to guarantee top flight football next season. A win against their next opponents, Dunbeholden, at the Constant Spring Sports Complex on Sunday will lessen any relegation worries they may be harbouring.

The two-week break did little to improve the confidence or the premier league health of UWI FC. They were soundly beaten 3-0 by second- place Mount Pleasant F-A on Sunday and relegation seems more a fact than a strong possibility at this stage. While Molynes United are still winless in 2020, the Pelicans haven't done their part in closing the gap. Since their last win on November 17, they have only picked up seven points in 14 games. If they cannot get any wins in the seven games remaining, it will not matter how many points Molynes drop the rest of the way. They host Cavalier on Sunday.

The Andrew Price-coached Humble Lion made things difficult for Waterhouse in their game at the Effortville Community Centre, but they could not keep the league leaders out, losing 1-0 via a Keithy Simpston penalty in the 77th minute. The result is disappointing for Humble Lion, considering that they had an opportunity to move into third place temporarily with defending champions Portmore battling in the Concacaf Champions League round of 16. Humble Lion will have plenty of time to reassess themselves as they will not play again until March 12 against Portmore United, a game that could determine seeding come the play-offs, or a possible challenge for the final first round bye.

While Vere United avoided defeat last Sunday, drawing 1-1 against Dunbeholden, they will be heartbroken at conceding so late, denying them their first win since November 24 and a glimmer of hope of preserving their Premier League status. While they are now level with UWI FC on 18 points, they are still nine points from safety and are running out of games to get results. Draws can no longer help them. They need wins in their next seven games and for Molynes United to keep dropping points to have a chance of pull off a great escape. They travel to Harbour View on Monday night.