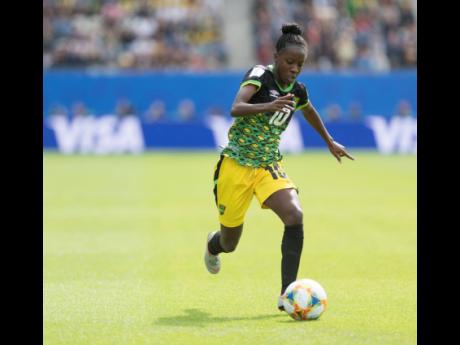 Head coach Xavier Gilbert praised the performance of striker Jody Brown as Jamaica cruised to a 4-1 win over El Salvador in their Group E game at the Concacaf Under-20 Women’s Championship at the Estadio Panamericano in the Dominican Republic yesterday.

Brown led the way with two goals in the second and 11th minute, while Lacey Murray and Chantelle Parker added to the score sheet in the second half as the young Reggae Girlz advanced to the knockout stages of the competition with a game in hand. El Salvador got their goal through Maya Rodriguez in the second minute of added time in the first half. Gilbert said that Brown’s experience playing in last summer’s FIFA Women’s World Cup has given his squad an injection of morale.

“When you have a player who played in the World Cup and coming at this level, it must be a boost of confidence,” Gilbert told STAR Sports. “I think the players feed off her energy. Credit must be given to her, the way that she has been performing and the work that she has been putting in, in the tournament so far.”

Jamaica are tied on four points with second-place Canada who drew with Guatemala 0-0 in yesterday’s other game, but lead the group via a superior +3 goal differential. Canada have also secured their place in the knockout round and will meet the Reggae Girlz in their final group game to determine the group winner tomorrow at 3 p.m.

The top two teams in the tournament will qualify for the Under-20 Women’s World Cup to be held this year in Costa Rica and Panama and Gilbert is optimistic of their chances of representing the region at the tournament this August.

“We are giving it our best shot and we are doing what we need to do and, hopefully, the effort that we put in will take us there,” he said.