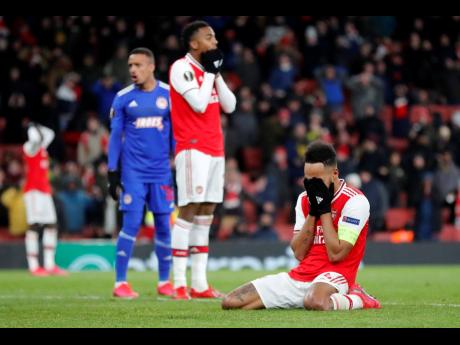 From saviour to scapegoat in 10 nerve-shredding minutes, Arsenal captain Pierre-Emerick Aubameyang went through the full range of emotions as his team was knocked out of the Europa League in agonising fashion yesterday.

On a night when Portuguese sides Porto, Benfica and Sporting Lisbon were all eliminated and one of the country’s recent exports – Bruno Fernandes – led Manchester United’s progress to the last 16, the biggest drama happened at Emirates Stadium and Aubameyang was at the centre of it.

The Gabon striker scored a fabulous scissor-kick in the 113th minute to equalise for Arsenal at 1-1 against Olympiakos and put the English team 2-1 ahead on aggregate in the second leg of the round of 32.

When Youssef El Arabi prodded home a speculative cross in the 119th, Olympiakos led on away goals but there was still time for one last chance for Arsenal, and it fell to its most lethal striker in the third and final minute of stoppage time.

This time, though, Aubameyang somehow managed to shoot wide from a central position at the edge of the six-yard box with the goal at his mercy.

Aubameyang fell to his knees and covered his face with his hands, having not long earlier been mobbed by his jubilant teammates after his acrobatic goal.

“I feel very, very bad,” he said. “It can happen but I do not know how I missed this chance. I was tired, I had some cramps but it is not an excuse.”

England will have to be content with two teams in the last 16, led by Man United and its new star signing Fernandes.

Fernandes, the Portugal playmaker, continues to prove that the US$88 million he might end up costing United should be money well spent.

He stroked home a penalty following his signature skipping run-up, then had a hand in United’s two other first-half goals in a 5-0 win over 10-man Club Brugge. Fernandes had already left the field at Old Trafford, to another huge ovation, by the time Fred added the fourth and fifth goals to complete a 6-1 aggregate win.

Wolverhampton are the second English team through, beating Espanyol 6-3 on aggregate despite losing the second leg 3-2.