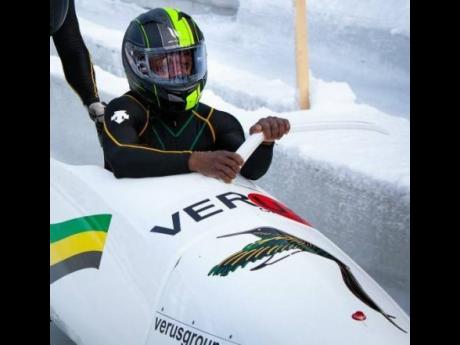 Driver Shanwayne Stephens in his bobsleigh.

The story of the Jamaica Bobsleigh team which participated in the 1988 Winter Olympic Games continues to inspire young athletes three decades later.

The bravery Devon Harris, Dudley Stokes, Michael White, Freddy Powell, and Chris Stokes, five men from a tropical country participating in a Winter Olympic Games with borrowed equipment, showed not only to inspire the making of a movie but also encourages Jamaicans in the Diaspora to take up the sport.

Shanwayne Stephens, a member of the British Royal Air Force, is one of the inspired athletes.

Stephens, who is the driver of the four-man and two-man teams, has been living in the United Kingdom since he was 11 years old. But, he wanted to be part of Jamaica Bobsleigh organisation since he saw the movie Cool Runnings.

"I chose to represent Jamaica because of the love of the island and the love of the Jamaica bobsled story and what it really represents," Stephens said. "The bravery and resilience that they exemplified is something that I definitely want to be part of my character."

Stephens was in the island last week with the British Royal Air Force and he got a chance to work with the local athletes.

It also gave him the opportunity to view the new resources the federation recently acquired.

He told STAR Sports that with the new resources and the camaraderie, the team is developing and will enable them to continue the Cool Runnings legacy by qualifying for the next Winter Olympic Games.

"I believe we are doing the right things to start getting some positive results with the equipment that we now have," he said. "I think we are in a position to start getting results again and if we get results then it will inspire others to take up the sport."

Stephens and the other members of the four-man team missed out on qualification to the Winter Olympics two years ago by just one spot. But the 29-year-old believes that the misfortune has inspired the group and he doesn't have a scintilla of doubt that they will make the cut for the Beijing Games in 2022.