It’s a tough one to lose – Miller 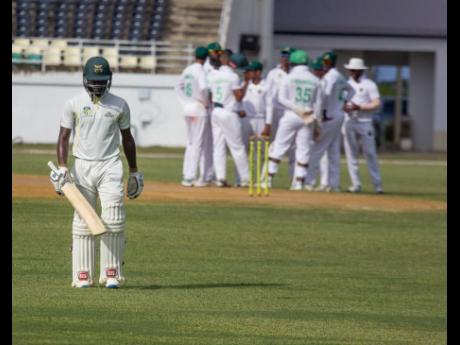 Scorpions batsman Jermaine Blackwood walks back to the pavilion after being dismissed by Veerasammy Permaul in the West Indies Championship match in Trelawny on February 29, 2019.

Jamaica Scorpions assistant coach Nikita Miller says his team has taken the loss against the Windward Islands Volcanoes on the chin and the team is trying to regroup as they travel to face the Leeward Islands Hurricanes later this week in Antigua in the eighth round of the West Indies Championship.

The Scorpions went down by two wickets to the Volcanoes on Sunday after Andre Fletcher with 71 and Sunil Ambris, 56, set up the run chase for the home side Volcanoes, who successfully got the 225 runs needed for victory on the final day.

For Miller and the Scorpions, the loss stung even more after they posted a formidable 381 runs in their first innings and then imploded for a mere 60 runs in their second innings.

The assistant coach, however, credited his young bowling unit for showing fight and restricting the Volcanoes to 217 and 225 for eight.

"It's a tough loss to take and we are disappointed with our display, to score 60 runs on a pitch like that is totally unacceptable, but we are trying to get this loss out of our system and try and stay positive for the remaining games," said Miller.

Winning Jamaican Volcanoes coach Andrew Richardson says the changes that were made for the encounter bore fruit, and he is hoping his charges can continue in the positive vein.

"Our senior players stepped up in this match with the bat and I thought our young bowlers did a good job with the ball. We have only got 20 wickets twice in this competition so far and on both occasions, we have won those games, so it is clear where we need to continue to improve," said Richardson.

In the meantime, the Scorpions are expected to make at least one change to their squad that will travel to Antigua as left-arm spinner Dennis Bulli, who missed the game against the Volcanoes, will return home due to illness.