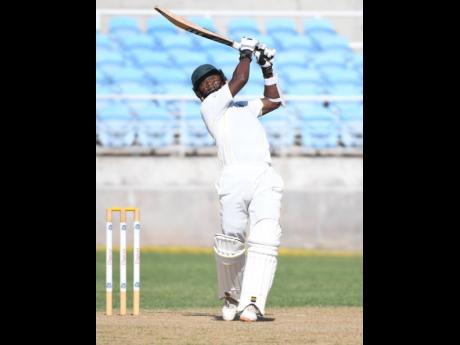 The Jamaica Scorpions have drafted in right-handed middle-order batsman Andre McCarthy into their squad for today’s eight-round West Indies Championship clash against the Leeward Islands Hurricanes at North Sound in Antigua.

McCarthy has not featured for the Scorpions this season, and the right-hander could be thrust straight into the team to spruce up the batting line-up which was woeful in the second innings against the Windward Islands Volcanoes where they crumbled for a mere 60 runs.

If given the nod, McCarthy would immediately want to replicate his 2015/2016 season form where he scored 520 runs in 10 matches with a century and two half-centuries.

In the meantime, assistant coach of the Scorpions, Nikita Miller, says a win against the Hurricanes would put them right back in the fray with the Jamaicans currently lying fifth after entering the seventh round in third position.

“All the teams above us, except for Barbados, are not too far away in terms of points, we want to stay positive and try and correct our mistakes from the Windwards game and try to come away with maximum points here in Antigua”, said Miller.

Meanwhile, all 11 matches between the Scorpions and Hurricanes in the PCL era of the Championship have been won, with the Scorpions holding a 7-4 edge, including a five-wicket victory in the fifth round this season.

The Hurricanes, who will be without their leading wicket-taker Rahkeem Cornwall, has welcomed back West Indies right arm leg-spinner Hayden Walsh Jr and fast bowler Alzarri Joseph, along with batsman Jaison Peters.