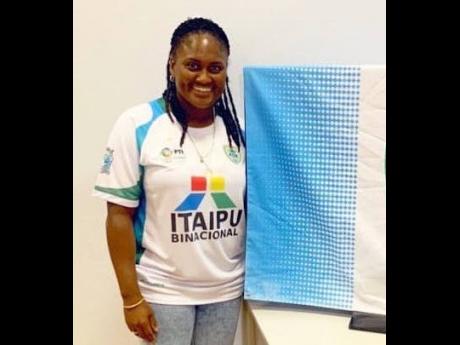 Reggae Girl Shanoska Young has embarked on another footballing adventure which has seen her take her talents to the land of football, Brazil.

The 31-year-old utility player is currently on the roster of Brazilian club Foz Cataratas which plays in the Serie 'A' B league in the Campeonato Brasileiro.

Young, who was part of the Reggae Girlz unit that took part in the Windrush celebration match against Nottingham Forest back in 2018, says making the move to Brazil was a big stepping stone in her career.

"I have played professionally in Croatia and Denmark, where I was a regular starter. Here in Brazil, the competition is really stiff and you have to prove yourself and that was the kind of drive and motivation I was looking for to take my football to another level," said Young.

The former Nova Southeastern University player, who made her debut for Jamaica against Costa Rica back in 2014, says playing in Brazil has helped her to get better at her game, and she believes a lot of doors can be opened for more Jamaicans to play in the land of Samba.

"People are talking a lot about the Jamaican female footballers over here and I have heard teams enquiring about certain players when you look at it. The opportunities are here and the football is good, the weather, however, is very hot but the people are amazing", added Young.

With the coronavirus pandemic affecting all football around the world, Young says her league is currently on hold for at least the next two weeks, however, she is hoping she will get the opportunity once again to start playing football.

"We have to just sit it out and watch and wait, what I have been doing to pass the time is to brush up on my Portuguese and I will also teach the Brazilian players English," said Young.