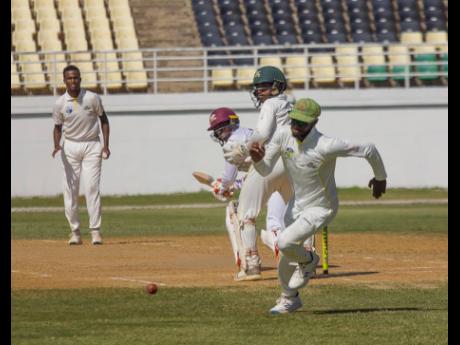 Bowler Patrick Harty (left) looks on during recent cricket action between the Jamaica Scorpions and Leeward Islands Hurricanes at the Trelawny Multipurpose Stadium.

It is always a dream for most young cricketers to represent their country at the highest level. For many, donning the black, green and gold for Jamaica is the epitome of national pride and joy.

For left-arm spinner Patrick Harty, making his senior debut for the Jamaica Scorpions in the 2020 West Indies Championship was a dream come true, and it was a dream that turned out to be a memorable one for the former York Castle High player.

Harty didn't just show up for the Scorpions this season, he turned out to be one of the best bowlers for the franchise having picked up 22 wickets, the joint second most for the team with seamer Derval Green. Fast bowler Marquino Mindley snared the most scalps with 24.

Harty's career best bowling figures in the tournament didn't come until the fifth round after a slow start to the season.

"My first game for Jamaica away against the Trinidad and Tobago Red Force, I bowled 36 overs and got no wicket for 116 runs. I wasn't discouraged because I know I was inexperienced and I still believed in my abilities. I just kept fighting and was persistent," said Harty.

In his second game for Jamaica back on home soil at Sabina Park, Harty's persistence eventually paid off as he remembers quite vividly when he got his first wicket.

"I will never forget that feeling when I saw the ball hit the stump of Shane Shillingford to get my first wicket at this level, that gave me a lot of confidence," added Harty.

The Kingston Cricket Club player, who admires Jamaica's Nikita Miller, New Zealand's Daniel Vettori and Sri Lanka's Rangana Herath, would go on to pick up three wickets in that innings and finished with four in the match, and that was the catalyst which laid the foundation for what was to come.

"As the games went on, I could see my confidence growing more and more. I had to adapt quickly because the batsmen at this level from one to 11 are capable and they have better technique and defence, " he said.

With a lot of the wickets not offering much spin, Harty said he had to rely on a lot of variations and utilised conditions to suit his bowling.

Those variations came to the fore in the fifth round of the competition when he bagged his career-best figures of four for 43 runs in a winning cause against the Leeward Islands Hurricanes at the Trelawny Multipurpose Stadium.

To date, he is the only bowler to have picked up a wicket in every game for Jamaica this season, bowling the most overs of 252.5.

The University of Technology graduate who holds a bachelor degree in information technology, says, all in all, it was a good season, and the sky is the limit moving forward.

"I really can't complain, it has been a good season. I have received a lot of positive feedback and I want to continue to put in the hard work and get better at my craft because ultimately, I want to make it to the next level," he said.