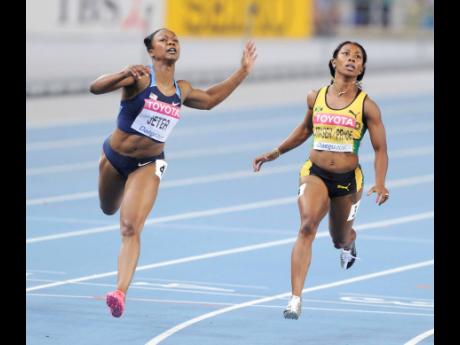 Four-time World 100 metres champion Shelly-Ann Fraser-Pryce revealed recently that she was reduced to tears after she missed out on a medal at the 2011 World Athletics Championship in Daegu, South Korea.

In a rare Instagram live conversation, the two-time Olympic 100m champion said that she cried after she registered 10.99 seconds for fourth in a race won by her rival at the time, American Carmelita Jeter, who posted 10.90. Jamaica's Veronica Campbell-Brown finished second in the race in 10.97, while Kelly Ann Baptiste of Trinidad and Tobago won bronze in 10.98.

"When I left the track and went around the back (warm-up track) ... I saw my coach Stephen Francis and just start to bawl," Fraser-Pryce said. "The worst place you can finish in a race is fourth, because it means that you just miss out on the medals."

Fraser-Pryce came into the race as the defending champion and the reigning Olympic gold medallist.

The 33-year-old recalled the moment after Jeter joined the conversation on Wednesday night.

"When running with dem girl here, dem serious before the race," Fraser-Pryce recalled about Jeter's pre-race demeanour, much to the delight of the American.

Jeter also revealed that she loved racing in Jamaica as the fans always showed her appreciation.

She retired from the sport in 2016 and is now the head track and field coach at Missouri State University.

Fraser-Pryce returned to the sport two years ago after she took time off to give birth to her son, Zyon.

She retained her world 100m title last year at the Doha World Championships.