Gold, silver and silver … A surreal moment for Simpson 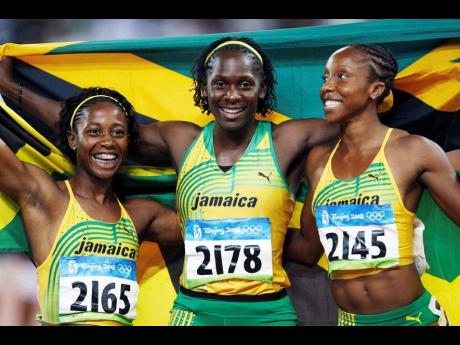 The Beijing Olympic Games in 2008 delivered a bevy of great sporting moments for Jamaica as sprinting legend Usain Bolt zoomed to world records in the 100m, 200m and sprint relay.

But one of the most standout moments of those Games was when his female counterparts, Shelly Ann Fraser-Pryce, Kerron Stewart and Sherone Simpson crossed the line first, second and second in the women's 100m.

Simpson, who matched Stewart's 10.98 seconds to secure one of the silver medals, recalled the moments after the race.

"First we saw that Shelly Ann won, and then it took a while for the second place to come up. And when I saw that other two spots come up and it was like one, two, two, we were like wow! It was one, two, two and not one, two, three. It was just an awesome feeling," Simpson said.

"It felt good hearing the National Anthem play and getting an individual medal. I was very happy. It was a surreal moment."

Simpson, who owned the title of world's fastest woman in 2006 after she registered times of 10.82 and 22.00 seconds in the 100 and 200 metres that year, said she was worried before the race as she had done a surgery on her left knee months before.

"Warming up was very difficult because I had a lot of pain in the left knee, so for me, it was about trying to not think about the pain and try to get a very good start; and I really went there to get a medal. So my aim was just to get a good start and hang on until the finish," Simpson recounted.

Fraser-Pryce captured her first of two Olympic gold medals in the event in 10.78 seconds.