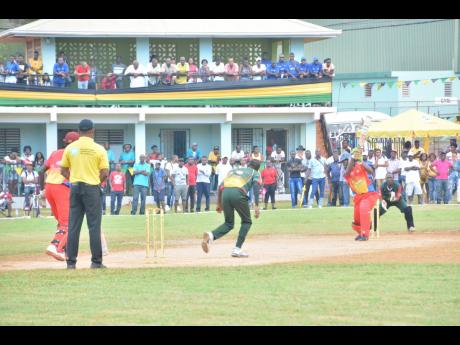 Action from the Wray and Nephew/Social Development Commission All Island Twenty20 cricket final between Gayle and Orange Hill at the Port Rhoades Sports Club in Discovery Bay, St Ann, on Sunday, August 25, 2019.

"The Port Rhoades Club is interested in returning as a Jamaica and international Cricket venue, and as one can recall, it has hosted many international matches with guaranteed maximum spectator support from rural fans in the region," Skyers told STAR Sports.

Skyers pleased at what he considers a successful staging of the last major cricket match held at the club, last season's Social Development Commission All-Island Twenty20 finals, which attracted around 5,000 spectators, which he says were adequately accommodated at the venue.

Apart from the sporting facilities that include a sports field for cricket, athletics and other sports played on grass, the facility also consists of netball courts, a gymnasium and a conference room.

Currently, Port Rhoades is the home of St Ann cricket, the North-eastern JAAA Championships, and several other sporting groups and organisations.

However, cricket remains the focus at this time with Noranda brought up short by the COVID-19 pandemic with cancellation of the company's sponsorship of the St. Ann parish and divisional competitions, and a community league that involves 23 youth club teams.

While under the COVID-19 lockdown, the grounds are being maintained with added landscaping, and plans to introduce indoor attractions such as a museum to showcase bauxite industry history, the push cart derby story featuring the bobsled and Cool Runnings sequels, catering and bar upgrade, all with an eye on its potential tourism value.