Cricket is back! - West Indies captain confident on the return of international cricket 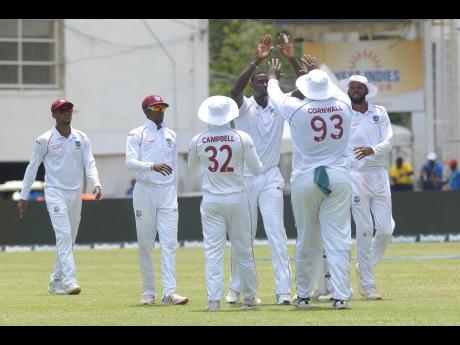 Jason Holder (third right) celebrates with teammate Rahkeem Coornwall who caught India’s Marayank Agarwal off his delivery on day one of their second Test match at Sabina Park in Kingston, Jamaica, on Friday, August 30, 2019.

December of last year was the last time the West Indies donned their whites as they defeated Afghanistan in a one-off Test match in India. Fast-forward to the present, and the regional boys will enter a new era of the gentleman's game with a biosecure three-Test series that has been brought on by the devastating coronavirus pandemic.

Today's first day of the first Test will feature no fans and just 22 cricketers battling over five days, and according to West Indies captain Jason Holder, his team is up for the task.

"Everyone is really excited to get back to the park. It's been a while since we've played international cricket, so everyone is relishing the opportunity. We've had four solid weeks of fitness and the guys have worked really hard to get back to match fitness. This is more or less the green light. Everyone has been talking about it for the last couple of weeks, and most of the boys are eager to get to the first ball that will be delivered," said Holder.

A lot of concern has been raised about the West Indies ability to put runs on the board, with the lower order, including Holder and wicket-keeper Shane Dowrich, carrying the bulk of the load.

Holder, however, believes the batting unit will come good as the preparations have been excellent leading up to the Test.

"I know a lot has been said about the lower half contributing the bulk of the runs in the recent past, but if you look at the calibre of players we have, like Kraigg Brathwaite, Shai Hope and Shamarh Brooks, they have all had success in England with the senior team or the 'A' team. I am more than confident these guys will do well in the series," added Holder.

Holder will be keen to put in a good personal performance as he needs just 102 runs to reach 2,000 in Test, while fast bowler Kemar Roach needs just seven wickets to reach the milestone of 200 Test wickets.