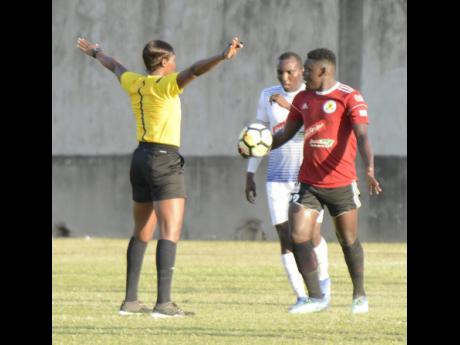 STAR Sports understands that a number of local referees are upset after not receiving money owed to them by the Jamaica Football Federation (JFF) for ISSA schoolgirl football matches since February.

One referee, who asked for anonymity, says he feels disgruntled that this issue of being owed funds is not the first, and started when ISSA began making payments to match officials through the JFF, who appoints officials for matches, rather than through the various parish associations, as was done in the past.

"With JFF now, the problem is that the money is taking longer to reach the referees. When KSAFA (Kingston and St Andrew Football Association) was being given the money by ISSA, yuh know seh every month yuh get yuh money. I got my 2017 Manning Cup payment in 2019. That is when JFF took over the payments."

"Some a wi very weak enuh," he said. "Because wi depend pon the money from the matches, a lot a dem still go. When JFF seh 'Jump,' dem jump before dem even ask how high.

"Nuhbody cyaan work when dem naa get pay, mi boss. A nuff time ISSA competition get stick up. There are a lot of refs who seh 'Mi nah do di match because mi nah get pay'."

But the match official says that despite feeling aggrieved, he and his colleagues still officiate matches to the best of their abilities.

"Sometimes the reports may not be submitted on time but mi nuh think referees drop dem hand," he said. "At di end a di day it a go affect you as di referee, and affect yuh credibility."

But Victor Stewart, the head of the JFF Referees Committee, says he believes referees who are upset about the lack of payment are being unreasonable.

"What happened from February until now is the coronavirus. We are in contact with ISSA and we are in contact with the referees and referees group. We have sent out communication to them. ISSA's office has been closed since March and all football has been aborted. We had assurances from ISSA that as soon as their offices open, all outstanding payments will be made and we've communicated that to the referees. The JFF owes no money right now. We had a situation where we had outstanding money to the referees from the federation's point of view, but all of that has been paid. ISSA is one of our best stakeholders, one of the most compliant in terms of payment. But with the coronavirus and the suspension of the league, nothing is happening and we explained it to the referees and would've expected understanding," said Stewart.