Nicholson on target again in Belgium 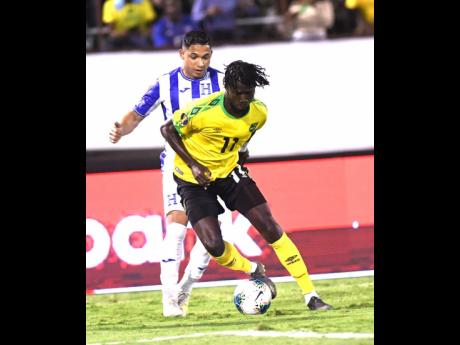 Jamaica international Shamar Nicholson had another good outing for his Belgian club RCSC Charleroi, registering a goal and an assist in their 2-0 win over Zulte Waregem in their Jupiler League fixture on Sunday.

With his team already leading 1-0, Nicholson made the points safe two minutes from full time, tucking away his third goal of the season to maintain Charleroi's winning start to the season and first place in the league. They now have accumulated the maximum 15 points from all five league games played, with 15 points, six points ahead of defending champions Club Brugge, who are in fifth place with nine points.

Charleroi head coach Karim Belhocine said in his post game comments that their opponents made them work for the result.

"There is no easy match. It was a very difficult game for us against a team of Zulte Waregem's [ability] which was very eye-catching," he said.

With both teams unable to break the deadlock in the first half, the opening goal final came in the 71st minute when midfielder Ryota Morioka won the ball in the penalty area and laid off a pass to Nicholson, whose attempt was deflected into the path of Kaveh Rezaei who tapped home from close range for his third goal for the season. Nicholson finished the game off 17 minutes later, firing into the roof of the net after being put through by second-half substitute Luca Ribeiro.

Nicholson has now scored in his second straight fixture against Zulte, having found the net in Charleroi's 4-0 win in February. Charleroi's next league fixture will be this Friday against newly promoted Beerschot who are in second place with 12 points.

Nicholson's European campaign will begin on September 24 as Charleroi will face either FC Sfintul or FK Partizan in the third qualifying round of the Europa League.