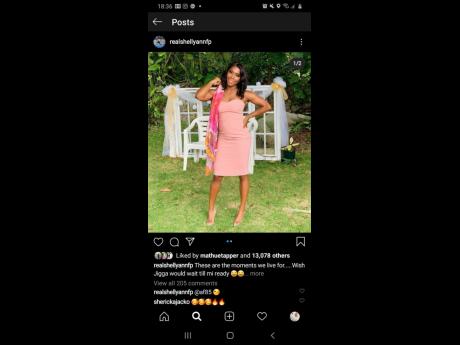 Fraser- Pryce, donning a mauve pink dress with a floral scarf thrown over her shoulder, appeared to be in a celebratory mood in her post yesterday.

She asked, in the caption, why her husband, Jason Pryce, won't wait for her to complete her pose before he captures the frame.

"These are the moments we live for... wish Jigga (Jason) would wait till mi ready," the caption read.

Though it seems far-fetched, the photo had a few fans wondering if she is pregnant with her second child.

"Is that a baby bump I'm seeing," one user asked.

Fraser-Pryce took a break from athletics in 2017 to give birth to her first child Zyon Pryce.

She made a successful return by claiming her fourth World 100m title at the Doha World Championships last year.