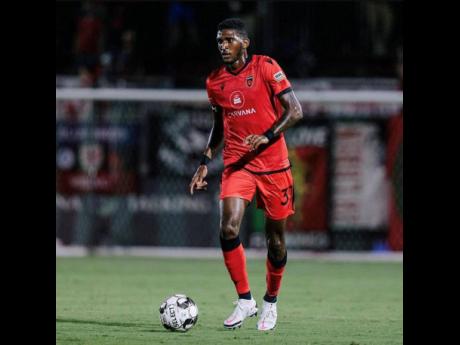 National defender Damion Lowe has made his debut for Egyptian club Al Ittihad in a losing effort as they were defeated 2-1 by Al Ahly in the Egyptian Cup semi-final yesterday at the New Suez Stadium in Suez, Egypt.

Al Ittihad took the lead in the 35th minute through Razak Cisse but were undone by two goals late in the second half by Mohamed Magdy in the 72nd minute and Hamdi Fathi in the 89th minute, securing the come-from-behind victory and stopping Al Ittihad's quest for a seventh Egypt Cup title. Al Ahly the reigning Egyptian League champions will now face Tala'ea El Gaish in the final on December 5.

Despite only signing for the club last Saturday and participating in a couple of training sessions, Lowe was given his first start under his new head coach Hossam Hassan and played the entire 90 minutes.

The game was Lowe's first club match since October 25 when he was a member of United Soccer League (USL) championship club Phoenix Rising FC and played in the Western Conference championship game which they defeated El Paso Locomotive FC 4-2 on penalties.

Trailing 1-0 at the half time break, Al Ahly managed to find the equaliser, thanks to a great finish from Magdy with 18 minutes to go in the game and Fathi got the winning in the last minute of the 90 minutes with a well-placed header to break the hearts of their opponents and earn an opportunity to win the cup for the 37th time.

Lowe will now prepare for the new Egyptian Premier League season which is scheduled to begin on December 11. Al Ittihad will look to improve on their 10th-place finish last season.