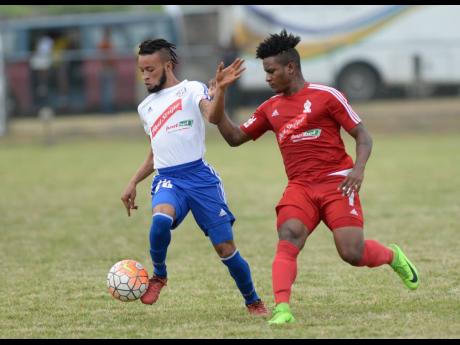 FILE Portmore United’s Maalique Foster shrugs off a challenge from UWI’s Allando Brown during their Redstripe Premier league semi final at UWI Bowl on Sunday, May 28, 2017.

Ahead of his new adventure with his new club Sacramento Republic FC, national midfielder Maalique Foster is being pinned as one of the players to watch for the new campaign according to club general manager Todd Dunivant.

The 24-year-old Foster is one of the new additions to the team for the upcoming United Soccer League (USL) Championship season after previous stints in Israel and Costa Rica. The deal was made official last month.

Dunivant said that he is excited in adding a player that will be able to bring additional firepower to their attack and believes that 2021 could be a productive season for the St Catherine native.

"Maalique is a rising talent that we believe is poised for a break-out 2021 season. His ability to stretch the defence will add a new dimension to our attack, and we are excited to add his consistent scoring production to our team," Dunivant said on the club website.

Foster has had experience in the USL, having played the first half of 2019 for Rio Grande Valley FC on loan from his Costa Rican club Santos de Guapiles. He scored three goals and registered four assists in 11 matches and was named into the USL Championship team of the week twice.

The former Portmore United player had returned home last year to recover from a groin injury he suffered in the Israeli first division league with club Hapoel Ironi Kiryat Shmona FC. He was shot also injured in an incident last October.

Foster's last international appearance for the Reggae Boyz was in November 2019 during their 2-0 win over Antigua and Barbuda in the Concacaf Nations League. He has made a total of eight appearances for the senior team and scored three goals.

The schedule for the new 2021 USL Championship season has yet to be released.