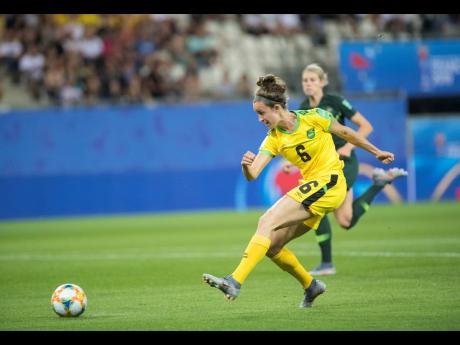 After a year which saw much changes professionally for national midfielder Havana Solaun, the 27-year-old will have stability in the National Women's Soccer League (NWSL) with the North Carolina Courage for the foreseeable future.

The club announced yesterday that Solaun, who joined the team last September on a short-term deal, has signed a one-year extension with the club, with an option for an additional year for the upcoming season.

Solaun previously signed with Cyprus club Apollon Limassol FC in August which was expected to be her official return to club football after her season was hampered by the coronavirus pandemic. She joined the NWSL in the latter part of the season, participating in the final two games of the Fall Series, the abbreviated second half of the 2020 season which was impacted.

Courage head coach Paul Riley says that her signing is an opportunity to stake her mark in the league, and that she will help in the team's charge for another championship.

"Havana is a soccer intellect. She has soft feet, is an effortless passer of the ball, and has the ability to break any team down, whether through a pass or on the dribble. It's time for Havana to announce herself to the NWSL, and I truly believe she can be a major impact for our team and stamp her ability on the league," Riley said on the club's website

Earlier in 2020, she had signed an agreement to join Paris FC of the French Division One Feminine, but was unable to make an appearance for the club.

Her recent move represents a return to the league where her professional career began for the University of Florida alum. She was selected 15th overall by the Seattle (now OL) Reign in the 2015 draft and was traded to the Washington Spirit in 2017 after two seasons with the club. She would make 24 appearances and score five goals during her one season in Washington and despite a new contract offer from the club, opted to join Norwegian club Klepp IL on a free transfer in 2019.