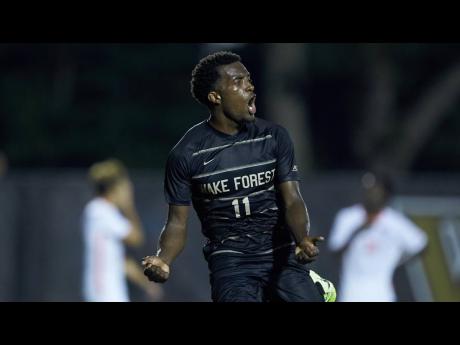 National youth player Justin McMaster says that he is looking forward to continue his development as a player as the newest member of Major League Soccer (MLS) franchise Minnesota United.

The 21-year-old forward was picked 17th overall in the first round of the 2021 MLS Superdraft last week, which was held virtually because of COVID-19.

McMaster spent his college career at Wake Forest University and previously represented Jamaica in the Under 15 and Under 18 Concacaf Championships in 2013 and 2015, respectively.

In an interview with the Star Tribune last Thursday, McMaster described the significance of the moment as unique, given the importance the club gives to the drafting process.

"It's really special to be drafted by Minnesota because they really value their draft picks," McMaster said. "They show a lot of interest and really develop players."

Despite an injury-plagued year where he had ACL surgery, head coach Adrian Heath said that he has the technical ability to fit with the team's philosophy.

We believe in his talent, he's a player that will fit in with our style of play. He's extremely athletic, he's dynamic on the ball, he wants to take players on with the dribble and he's more than capable of combining with his teammates across the field," Heath told the club website "It was a tough year for Justin and we firmly believe if he hadn't had his injury, there was no way he would have been available to us with the 17th pick."

During his four years at Wake Forest University, he made 58 appearances, scoring 12 goals and registering eight assists.

Former Harbour View defender Javain Brown will join McMaster in the league, as he was drafted by the Vancouver Whitecaps with the 23rd overall pick in the first round. The full back spent his college years at the University of South Florida and after a rough start to his career had a great 2019, which included him being named to the First Team American All Athletic Conference (ACC) and the ACC All-Rookie Team.

"I'm excited to be a part of such a wonderful franchise like Vancouver. I'm looking forward to being there, to get to work, putting in the necessary work that I need to do to be a part of the team," Brown said in a video posted to the club's Instagram Stories page.

This marks the first time since 2015 that two Jamaicans were selected in the first round of the MLS draft.