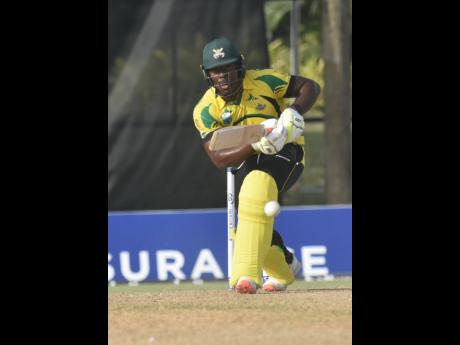 Jamaica Scorpions’ Odean Smith drives through the off side during his unbeaten innings of 68 as his team beat the Barbados Pride on February 21, 2021 to advance to the semi-final of Regional Super50 cricket competition.

Jamaica Scorpions all-rounder Odean Smith is no stranger when it comes to big games.

He was a member of the West Indies Under-19 squad that won the 2016 ICC World Cup when they beat India to lift the trophy.

That winning mentality has transcended to the present day for the St Elizabeth native, who has now established himself as an integral member of Jamaica's team in the current Regional Super50 Cup.

Smith and the Scorpions face a crucial semi-final tie against the Trinidad & Tobago Red Force today in Antigua, and the 24-year-old is relishing the opportunity of taking his home franchise to the championship game.

Smith, who has been a part of the Trinidad franchise in the regional four-day set up, knows all too well what the Scorpions will be coming up against, with the likes of Jason Mohammed, Evin Lewis, Imran Khan, Akeal Hosein and Sunil Narine in peak form.

The right-hander, who scored a match-saving unbeaten 68 against the Barbados Pride, is hoping that he can replicate that feat in the semi-finals, and hope that the rest of the team feeds off that positive energy.

"We have a lot of batting from one all the way down. It doesn't matter where I bat, when I go out there, depending on the situation of the game, if I have to hit some balls, I am a natural ball striker, so I am going to do it," said Smith.

The Jamaicans will be hoping that they can replicate their 2016-2017 Super50 form when they scored over 400 runs in dismantling the Trinidadians in the semi-finals at the same Coolidge venue that year.

In that game, present captain Rovman Powell scored 95, and Smith is hoping the skipper and the other senior batters can finally show their true mettle against the unbeaten Red Force team.

"We have to come up with our 'A' game today, our team is a good team but the Trinidad team is big as well. Our batting hasn't come to the party as yet, and I think in this game, I feel like if we come good with the bat, our bowling will do the job for us," added Smith.

Once again The Scorpions will be looking to all-rounder Andre McCarthy to come up big again with the ball, following his six wickets against Barbados.

Left-arm spinner Jeavor Royal and off-spinner Jamie Merchant are also expected to factor, along with Smith.