King Arthur to rule in feature 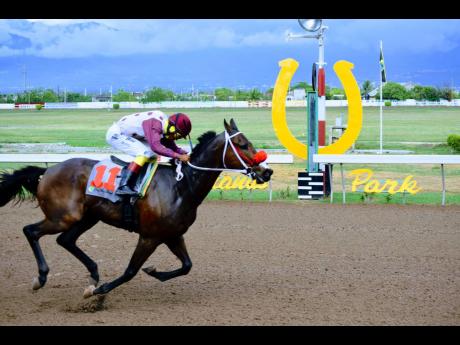 KING ARTHUR, with Anthony Thomas aboard.

KING ARTHUR ran probably one of his worst races ever last time out, carrying near topweight in the July 31 Legal Light Trophy at nine furlongs and 25 yards, finishing next-to-last , Anthony Thomas watching from 19 lengths down the track as CRIMSON beat HOVER CRAFT and NIPSTER in a three-way photo finish.

The 2020 derby winner appeared a shadow of the horse who had easily won the seven and a half-furlong King's Plate four Saturdays earlier, beating NIPSTER and CRIMSON, runners who not only turned the table but did so in a manner leaving many questions, which could be answered in tomorrow's She's A Maneater Trophy at a mile.

In the Legal Light, KING ARTHUR appeared to have nothing in the tank from the half-mile marker when his stablemate, EAGLE ONE, CRIMSON and NIPSTER kicked on.

Left struggling in fourth, KING ARTHUR was relegated to fifth by 11-year-old HOVER CRAFT, who ran down CRIMSON and NIPSTER in the stretch run to bomb the photo finish, underlining how poorly his four-year-old stablemate had performed.

KING ARTHUR returns for the She's A Maneater training significantly better than he had for the Legal Light, clocking a bullet 1:28.4 for seven furlongs, compared with 1:30.2. Another plus in his favour could be a wet track on Saturday, considering weather forecasts for a rainy weekend.

Though he seemingly prefers middle-distance races in which he can be wound up and make his bid from the three-furlong point, explaining his two losses at nine furlongs and 25 yards this season, it was on a muddy track that he had chased down NIPSTER to win last year's derby.

Leading trainer Gary Subratie has a lethal twin-threat, stay-forever CRIMSON and SENTIENT, who is back where he belongs after taking a two-race vacation, easily winning his last, among overnight-allowance runners at seven and a half furlongs, beating ROY ROGERS.

SENTIENT's versatility makes him the more dangerous of Subratie's duo, able to stalk and pounce quicker than slower CRIMSON, who could face problems on a wet track.

DOUBLE CROWN's victory was a massive turnaround in form with joint topweight, beating SENTIENT into fourth place. He quickly left LEGALITY standing leaving the three-pole, winning by six gaping lengths, appearing to have rediscovered the form with which he won back-to-back races, December 23 and January 23.

Should DOUBLE CROWN report anywhere near his last run, having trained well, seven furlongs in 1:29.3, easily, the same morning KING ARTHUR went almost a second faster, 1:28.4, it could be a case of handicaps against class. DOUBLE CROWN will run with 104lb, getting 22lb from KING ARTHUR, who had outclassed him in last season's classics.