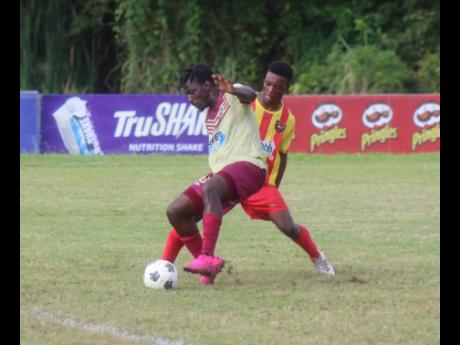 Getting their wings clipped might have delayed qualification but didn't knock William Knibb off top spot in their group. They have 15 points and still lead by two over Cornwall College who defeated Herbert Morrison Technical 1-0 in the early game. Herbert Morrison are third with 12 points.

Holland put pressure on their neighbours with intensity and purpose from the start forcing two point-blank saves from William Knibb's goalkeeper. They were, however, forced to change their approach when Husseth Brown was shown a red card just 24 minutes into the contest. The game didn't, however, get easier for the table-toppers as they went into the break a goal down as Jahiem Sankar netted for the visitors after taking advantage of a goalkeeping blunder.

The one man advantage couldn't help the hosts as Holland were resolute in defence and determined to upset their neighbours for at least bragging rights on Carib Road.

"I don't know if it's the occasion but we started very flat. Holland put 10 men behind the ball and that made it difficult for us to break them down. We didn't send many shots to goal to test their custodian even though we got ourselves into good positions," William Knibb coach Dwight Jeremiah said.

"It's best we lose at this stage, hopefully, we can rebound. We have a tough game on Friday to get over the line because we are right there," he added.

Coach of Holland, Dane Randall, praised his boys for their performance and said they were prepared and he is now hoping they can build on it for next season.

"I only have bragging rights for a little time because they are still leading the table. They just came a bit flat and overconfident because seeing us play some games they thought we could be a walkover. However, in this competition, there is no such thing as a soft team because a team can come prepared for you.

"Most of my players are young and we just have to keep building until we reap success."