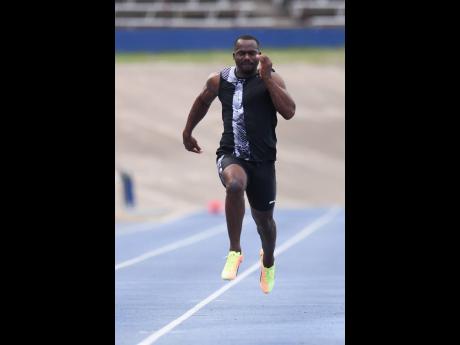 Olympian Nesta Carter says he has accepted a four-year ban given to him by the Independent Anti-Doping Disciplinary Panel for the use of the banned substance Clomiphene.

Clomiphene is a substance that boosts testosterone, and is on the World Anti-Doping Agency's list of banned substances both in and out of competition. Carter, a now retired sprinter, is said to have been found positive for the substance in a test done out of competition in March.

He escaped a maximum ban of eight years, for the second doping violation of his career.

Carter, 36 years old, says his breach was because of being preoccupied with his circumstances."

"I relied on the doctor treating me to ensure that the medication was safe for me to use," Carter said in a press statement. "I took the medication as prescribed, solely to treat my ongoing medical condition, not as a performance enhancement. My focus at the time was my quality of life, not my sporting career.

"I deeply regret this failure on my part to remain as vigilant as I should have been. Had I appreciated that Clomiphene was a prohibited substance, I would have either sought a TUE (therapeutic use exemption), or officially retired before starting the medication.

"The last thing I wanted was to leave the sport with a further stain on my career that could tarnish Jamaica's sprinting tradition."

The panel, which comprised chairman Kent Gammon, Japheth Ford, and Heron Dale came to a unanimous decision on Carter's punishment.

The disciplinary panel, we found that the athlete had been in breach of Article 2.1.1 of our rules and, therefore, we found no factors that would mitigate against any reduction in the sanction under 10.2, which is four years ineligibility from the date of our finding, which is essentially November 30, 2021," Gammon told the RJRGLEANER Communications Group.

Carter's first ban came in 2017 after retroactively testing positive for methylhexaneamine from a sample taken from the Beijing Olympic Games in 2008. That ban lasted three months, but it also resulted in Jamaica's men's 4x100m relay team at the Games being disqualified and losing its gold medal. That team also consisted of Michael Frater, Usain Bolt, and Asafa Powell.