STETHS, Frome through in Ben Francis 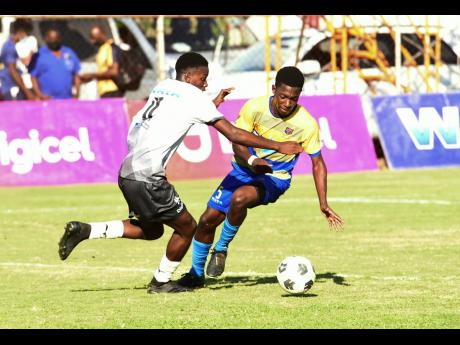 Frome Technical beat Munro College 1-0 in the earlier game of the double header at the STETHS Sports Complex.

STETHS started the game the stronger side, creating a number of opportunities to take the lead, but could not find the back of the net until the 30th minute. The goal came from some brilliance by Negus Daley, who cut inside his defender and released a powerful low shot, beating the goalkeeper for pace.

The hosts controlled the game from there before getting the second in the other half.

STETHS were gifted a chance to double the lead in the 56th minute when Nevaughn Myrie stayed on the ball long enough for Michael German to get a chance to beat the keeper.

STETHS assistant coach Davian Dennis was not fully pleased with the performance but was happy regardless.

"The result is great," he said. "We entered the competition wanting to win the daCosta Cup but fell short. However, we have a trophy to play for in Ben Francis, and even though the performance was not our best, we are into the semifinals, which we wanted from today.

"We really want it because this is a year we think we should win something. The Ben Francis Cup is the last chance, so we have to work and put everything into it."

Vere head coach Hugh Howell said the players' inexperience was the reason for the end to their season, which was intended to break their 39-year trophy drought. Their last trophy was the first Ben Francis Cup in 1982.

"It's very disappointing," he said. "These guys are very talented, but it will come with experience. Our season ended because of defensive mistakes. They are a young team and defence comes with experience. They will get it gradually and next year will be better.

"Their mentally is what I also want to change. I want them to have the winning mentality. I want them to know that we have to fight for what we want. Nobody is going to give us. We need back a winning culture."