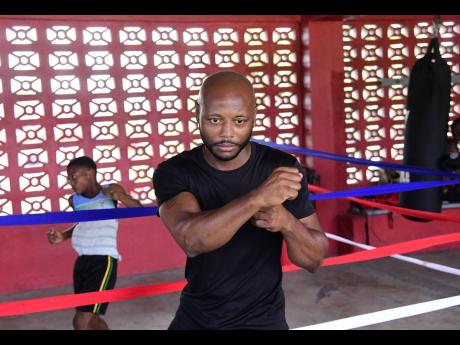 Coach Sakima Mullings at Suga Knockout Boxing Gym at The Olympic Gardens Football Club in Kingston on Saturday, May 7, 2022. Mullings gives support to the renovation efforts for the gym, which were started by coach Felipe Sanchez (not pictured) as well as support from the University of the West Indies Faculty of Sport. 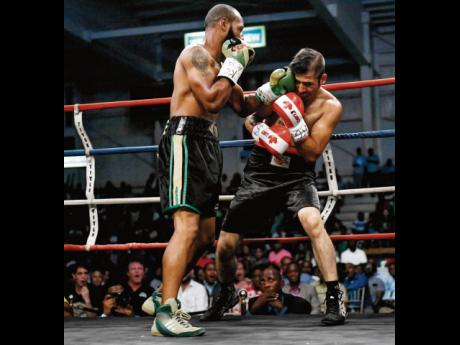 Sakima Mullings (left) on the offensive against opponent Alejandro Herrera during a bout on the under card at the Wray and Nephew Contender 2018 final held at the National Indoor Sports Centre in Kingston on Wednesday, July 25, 2018.
1
2

Boxer Sakima Mullings says despite a four-year absence from action, he's not done in the ring.

Mullings took a break from the sport in 2018 to treat a serious eye injury but also had to deal with a number of setbacks in that time, including the murder of his coach Chris Brown in 2019, and boxing's relative inactivity in Jamaica because of the COVID-19 pandemic.

But in that time, Mullings, now 39, focused on personal growth.

Apart from his time spent as a personal trainer at a Corporate Area gym, he has also been coaching Jamaica's next generation of boxers, and is pursuing a Masters of Sciences Degree in Sport Business Management at the University of The West Indies' (UWI) Faculty of Sport.

With the all-clear from his doctor to return to the ring, Mullings says his vision is at "100 per cent," and he is looking at all the youngsters trying to make a name for themselves hoping to receive a challenge.

"I'm not done in the ring," Mullings, who was speaking to STAR Sports during a renovation project at the Suga Knockout Boxing Gym in Olympic Gardens, St Andrew on Saturday, said. "Listen, Sakima Mullings, I label myself an old man. I'm not a boxing dinosaur. With that said, I'm just trying to put it out there to get one of these young boys to be brave enough to say they wanna fight Sakima Mullings."

But does he have anyone specific in mind?

"At this stage, just line them up and I'll knock 'em out," he said with a wry grin.

Mullings says that coaching has shown him a side of the sport he was not aware of only as a boxer, things he believes will only make him better than before.

"I always believed that I was a patient fighter but I've also learnt to be a lot more patient as a coach because teaching children, you have to be patient," he said. "Ultimately, it's patience. Things that I've learnt in boxing that I thought might've been easy or straightforward that conceptually anybody should be able to understand, I realise that certain children have barriers in understanding. It has made me a lot more patient."

Mullings graduates from the UWI next year and already has plans for how to use his degree to expand his reach in boxing.

"I see myself doing boxing promotions and having a boxing gym. I see a one-stop boxing shop in the future for Sakima Mullings," he said.

Another avenue he wants to explore is boxing commentary.

"I feel that I have a lot of boxing knowledge and I bring a different level to boxing commentary and play by play, and I know the boxers," he said. "When it comes to Jamaican boxing, I believe I have a different level and insight, and depth to where I can break down a fight where the average person can't. I'm here in the gyms. I know them from they were amateurs to when they turned professionals. I know what they like, what they don't like, their fighting styles, their weaknesses."

Mullings, who has a professional record of 26 wins, 18 by knockouts, and three losses, is a former World Boxing Council Caribbean Boxing Federation Welterweight Champion, and the only boxer to have won the Wray and Nephew Contender Series twice.