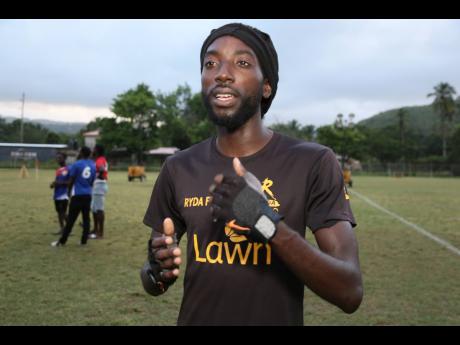 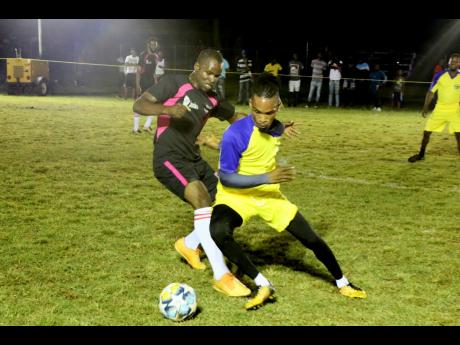 Action between Trinity FC (in black) and Coffee Grove during the Porus Football Festival at the Porus Community Centre in Porus, Manchester on Sunday. 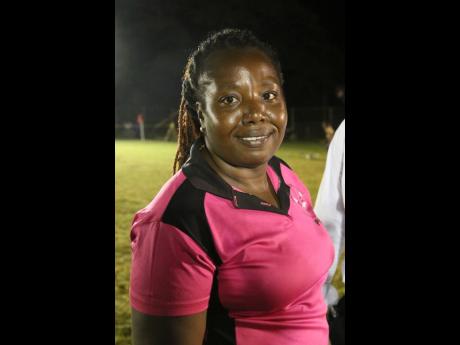 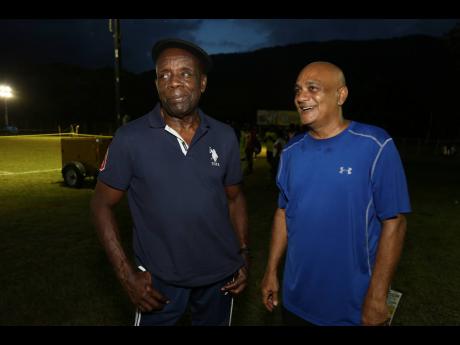 Crenston Boxhill (left) and Karam Persad in discussion at the Porus Football Festival on Sunday.
1
2
3
4

Patrick 'Cue P' Pinnock is pleased for the opportunities given to him by the Alliance Porus Football Festival.

The tournament got under way at the Porus Community Centre in Porus, Manchester, on Sunday with teams from the community vying for a $150,000 prize.

Pinnock's story is one that stemmed out of depression but evolved to him becoming the owner of the Ryda Football Club.

A recording artiste, Pinnock says when the COVID-19 pandemic closed the entertainment sector, he decided to venture seriously into his other passion, football.

"Since the pandemic when the shows locked down, mi literally deh a mi yard, depressed, actually lost my family at the time, then mi decide say...football! So football was more than a sport to me, it was like therapy," Pinnock told THE WEEKEND STAR.

Speaking on the the camaraderie and togetherness the festival brings to Porus, Pinnock said, "Football is the most important thing to the community, this is a great thing for the community - the kids are out, young people, old people, boys, girls, everybody.

"Porus Football Festival is everything to me because when I was going through a personable situation in 2020, football was what kept me sane," Pinnock said.

Other stakeholders have lauded the football festival as a game changer that has brought back unity to the community.

The festival is the brainchild of community activist Karam Persad, and Crenston Boxhill, former Jamaica Football Federation president. Boxhill says that the community's response to the venture has been overwhelmingly positive.

"It's all about getting the community united, getting the youth involved, and getting them off the streets," Boxhill told THE WEEKEND STAR.

Speaking on the decision to unite Porus through football, Boxhill said, "Football and reggae music is what [people] gravitate to, and if you can combine both of them, then it's a win-win situation. It's a pulling power."

Boxhill says that a concert staged at the end of each season, featuring what he describes as some of "Jamaica's top entertainers," has also been a pulling factor over the years.

One of the highlights of the night was defending champions Trinity United Football Club copping the win against Coffee Grove in an exciting 6-0 finish.

An enthused Adria Anderson, Trinity's manager, said, "It was a magnificent match. We are here, and we set the statement for anybody coming in to see what we are made of. When [the players] come out to play, they stop at nothing, but just straight winnings.

Speaking on the team's plan going forward, Anderson said, "Just winning and winning, and keep concentrating. We will be going back, regrouping, see where we made our mistakes and see how better we can get for the next game."