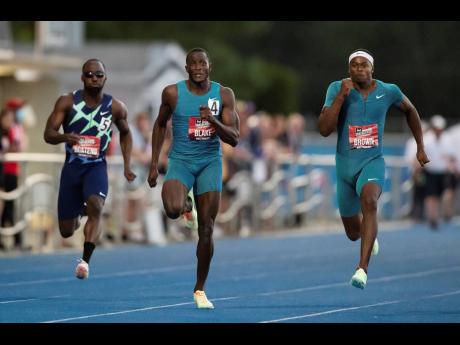 Aaron Brown (right) races to the win ahead of Jerome Blake (centre) who finished second, and Bismark Boateng, who finished seventh, during the men’s 100m at the Canadian Track and Field Championships in Langley, British Columbia on Saturday, June 25.

Jamaica-born Canadian sprinter Jerome Blake has punched his ticket to the World Championships in Eugene, Oregon, with his second-place finish in the men's 100m and 200m at the Canadian National Trials.

Blake, 26, is awaiting DNA results to confirm his relationship to reigning Jamaican 100m National Champion Yohan Blake. He clocked 10.19 behind eventual champion Aaron Brown (10.16), who won the double at the Canadian trials for the fourth time, and Benjamin Williams, who finished third in 10.35.

Blake, also placed second in the 200m behind Brown in a time of 20.32, but told STAR Sports he is confused by being drawn in lane three for the final.

"How do you put the person with the fastest time going in the final in lane three," he asked. "That kind of separated me an Aaron. I didn't really have the best bend, and with that, it was hard to catch him because I was in lane three. It's not really an excuse, but with that lane assignment it was tough to chase somebody that you couldn't really see," He said.

With a personal best of 10 seconds flat in the 100m, Blake said the main aim heading to Eugene, Oregon, is to take things in stride.

"It's my first World Championships team, so it's just to gain the experience and take it round by round," he said. "With that mindset, it's a lot easier rather than looking to take the entire thing head-on and executing. If you're in the final, then you've ran pretty fast, so that's where I want to put myself."

Blake was a member of the Canadian relay team that finished third in the 4x100m relay final in Tokyo. Following CJ Ujay's doping violation, Great Britain was stripped of its silver medal and the Canadian team comprised of Andre De Grasse, Brown, Blake and Brendon Rodney was upgraded to the silver medal.