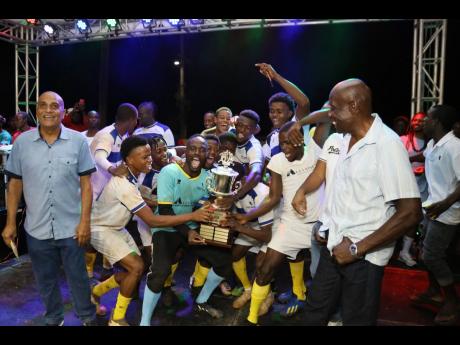 Venom Football Club was crowned the champion of the Alliance Financial Services Porus Football Festival, in front of thousands of spectators at the Porus Community Centre in Manchester last week.

An enthused Terrol Youngsam, club owner and captain of Venom, told STAR Sports that his team had long harboured dreams of being a part of the festival. He says he was confident of the win, citing an awareness of their opponents' techniques, and the quality of his players.

Youngsam said his team, a merger of four Clarendon communities, was propelled with strong support.

"We're an underdog team, and I'm trying a little thing in my district to bring out the youth, and show the talent we have in Gravel Hill and the adjoining communities; and I'm really elated to be a part of this [festival]."

Youngsam also expressed gratitude to a businessman from his community for providing his team with transportation from Clarendon into Manchester on competition days.

Omar Brown, chief executive officer of Alliance Financial Services, says his team was pleased to support the venture, adding that Sagicor, parent body of Alliance, is committed to enacting change within communities.

"Sagicor is big on community," Brown said. "Our mission is that we change the lives of people within the communities we serve, and being a part of this - it's a family event, everyone is out - this is the kind of event we want to participate in."

"It's a good vibes to see we can all come together as footballers and celebrities, and the people can see what we still have in us," Whitmore told STAR Sports.

Santokie, who also stages a football league in the parish, says that he is now focused on building the football prowess of youngsters in his community.

Former national striker Walter Boyd was also a member of the Masters and Celebrities team. Speaking of the game, Boyd said, "It's always a good feeling when football can bring the community together, and I'm glad to be here to see a couple of my fellow teammates. It was good being here, and I'm happy when things like this can happen."

Persad said the event has exceeded his expectations.

"It has grown continuously, and it has gone from just a Porus or Manchester league to a central Jamaica league, where people come in from all over and are really enjoying [it]," he said.

The festival, a part of the Porus Homecoming celebrations, returns next year.