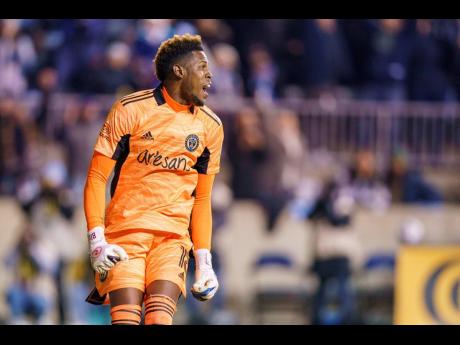 National goalkeeper and captain Andre Blake is a shock omission from the Jamaican 29- man extended squad set to face Argentina in their international friendly on September 27 in the United States.

Blake who plays for current Major League Soccer Supporter's Shield leaders Philadelphia Union has been left off the squad which included six players on standby if necessary. Goalkeepers Kemar Foster of Waterhouse, Dillon Barnes of Queens Park Rangers and Jahmali Waite of the Pittsburgh Riverhounds have been selected with Coniah Boyce Clarke of Reading FC among the six standby players.

While a reason has not been given for his release, posts circulating on social media have suggested that Blake's comments regarding the Jamaica Football Federation (JFF) have led to him not getting called up. On September 9, Blake responded to a comment regarding the possible candidates for the next permanent head coach saying that "A new head coach with the same federation will prolly equal the same results."

In an Instagram post yesterday Reggae Girlz ambassador Cedella Marley stood by Blake and alluded that he is paying the price for "standing up to the JFF. " How can the captain of our men's national team not be called up for this historic match against Argentina? Why do I feel he's being punished for standing up to the Jamaica Football Federation? The whole world is watching. You can fool some people sometimes but you can't fool all the people all the time and now we see the light. Stand up for your rights," Marley said. The post was reposted by Blake and others on his Instagram stories.

The match will mark the debut of former Iceland senior men's head coach Heimir Hallgrimsson as the next head coach of the Reggae Boyz. JFF technical committee chairman Rudolph Speid when asked if the coach had a hand in the selection of the team for the friendly said that "the coach is working already". A press conference is scheduled for Friday to unveil Hallgrimsson.

Blake's last game was against Mexico in their Concacaf Nations League clash on June 15.