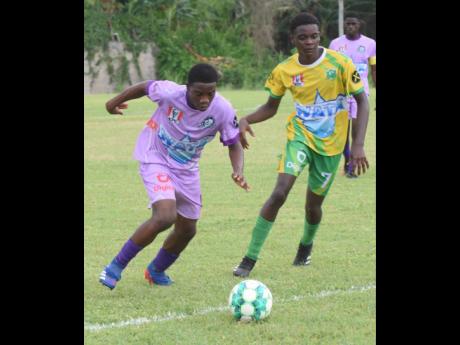 Campbell netted Irwin's second goal after just seven minutes. They had taken the lead with under a minute on the clock. Kenoy Morant tapped in after Green Pond's goalkeeeper blocked a shot and the ball fell at his feet.

The game settled into a more even contest for the rest of the half with both teams exchanging attacks. Green Pond had most of the possession early in the second half but the hosts managed to keep them at bay to make it two wins from as many games. Cornwall College are also on six points but they have played three games.

Campbell who is determined to lead his team past the first round of the competition said he wants to continue scoring for the team.

Campbell caught the eye of football lovers in the west when at the age of 13 he made his daCosta Cup debut against Cornwall College at the Catherine Hall Sports Complex in 2018. He produced some brilliant touches then but now, four years later, he is a more complete player.

"It's always a great feeling to score and help the team to win. All I did was follow what the coach said and we all executed well," Campbell said after yesterday's game.

"I am most definitely looking forward to the season. I want to score more goals and contribute to more wins," he added.

Campbell noted that while his objective is to score more than 10 goals in the first round the most important thing is to get the team to the next round.

"I want to score 10 or more goals going into the second round but firstly I want us to play as a team and ensure that we get to the next round. We have to listen to the coach and play our game," Campbell said.

Norman Foster, the coach of Irwin High, said they are looking to remain consistent in their quest to advance from the zone.

"Back-to-back wins for us are always a good look. The boys knew exactly what we were up against with Green Pond coming off a win over Cornwall College. They were motivated. We started well with the two early goals so it was a good performance from our team," Foster said.

"Irwin have never gotten such a start. We just have to keep our focus and hope to continue on the journey. We saw where last season we didn't start well and although we got some wins we advance from the zone. We are building well and getting out of the group is the primary aim," he added.

Elsewhere in Zone A, Cornwall rebounded from last Saturday's defeat with an 8-0 home win over Anchovy High.